« SNOW WHITE AND THE HUNTSMAN | Main | MADAGASCAR 3: EUROPE'S MOST WANTED » 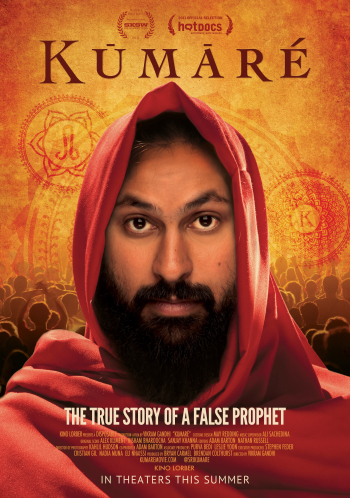 In an age in America where cult “gurus’ inspire women to breastfeed their children into bike-riding age, documentarian Vikram Gandhi puts the cult of Indian religiosity to his own test. Having the proper Indian bloodline for the job, the New Jersey-born Vikram reinvents himself as a yoga guru called Kumare.

With his newly grown beard and traditional garb Kumare sets up shop in Arizona. He invents his own chants, body postures, and dialectic, which telegraph that he is a fake.

The faux spiritual leader quickly accumulates a group of loyal followers that range from a rudderless but cute slacker of the nubile variety, to a death-row attorney. An interesting aspect of Vikram’s Kumare persona is that it reveals Vikram’s inner nature as a kind human being resistant to exploiting the power that his creation has over his more-than-willing subjects.

“Kumare” is a funny, suspenseful, and informative look at how religions are formed and sustained. Most people are approval-seeking followers willing to bestow far too much trust in people they consider to be spiritually enlightened — at that’s how it seems from watching this ingenious documentary.

Posted by Cole Smithey at 01:05:45 PM in Documentary, Women's Cinema