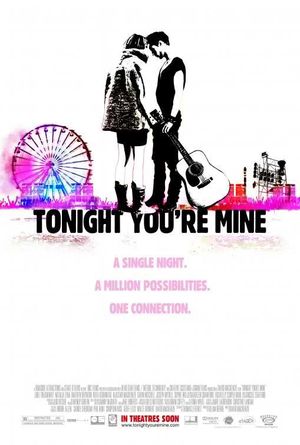 As far as movies about nothing go, David Mackenzie’s synth-rock fantasy love story scrapes the bottom of the barrel. Teen idol characters and their booze-filled fans gather at Scotland’s outdoor music festival “T in the Park” to mix bodily fluids with tobacco, pot, rain, and grime. Luke Treadway’s Adam is the egotistical singer for a crummy rock duo band with a proclivity for rehearshing acoustic versions of their songs in the back of ultra-compact cars. The disposable pop musician meets his polar opposite/equal in rival bandleader Morello (Natalia Tena) when the two find themselves handcuffed together by an asinine festival prankster who promptly disappears with the key. Unskilled in the art of using a paperclip to unlock a handcuff, the pair spends the movie bickering with their respective partners when they aren’t drawn into performing onstage together against their will. Short on substance, and barely approaching any degree of musical interest, “Tonight You’re Mine” is a half-baked piece of cinematic fluff for barely pubescent female audiences who ostensibly don’t know any better. What a snooze.

Listed below are links to weblogs that reference Tonight You're Mine: