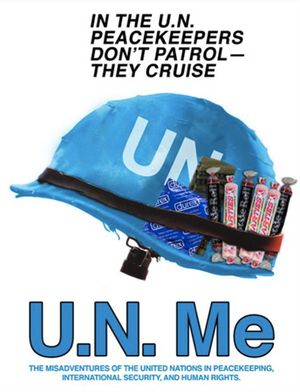 Any doubts about the United Nations’ place as a shadow agency for genocide, child sex trafficking, arms shipments, funding nuclear proliferation in places like North Korea, and every other kind of social abuse imaginable, are put to rest in co-directors Matt Groff’s and Ami Horowitz’s shocking dissection of the respected peace-keeping organization.

Founded in 1945, on the ashes of World War II with the stated purpose of protecting human rights and providing humanitarian assistance where needed, the United Nations is shown to function more frequently at the farthest extremes of its stated objectives. “To save succeeding generations from the scourge of war” is hardly on the agenda in 2012. The UN’s Counter-Terrorism Committee — charged with preventing terrorism — doesn’t even bother to define “terrorism.”

Our intrepid documentarian Ami Horowitz slips through the halls of power in places like Sudan, where he interviews Daffa-Alla Elhag Ali Osman, Sudan’s nonchalant Ambassador to the U.N. Horowitz asks about the genocide there — something Osman flatly denies, attributing widespread civilian deaths to a drought. Cough. Horowitz sarcastically posits that the Prius automobile might provide a solution to the problems in Sudan. Osman agrees.

The list of U.N. crimes is a long one. U.N. snipers shooting local protestors in Côte d'Ivoire — check. Bulgarian UN troops in Cambodia raping local women and children en masse — check. An oil-for-food scandal that provided Saddam Hussein with billions of dollars, yet resulted in no UN officials being imprisoned, much less fired — check. Still, the most egregious offence comes from former Assistant Secretary-General of Peacekeeping Operations in Rwanda and Darfur, Kofi Annan. Annan actively ignored Rwanda Peacekeeping Mission Head Romeo Dallaire’s urgent requests for operational authority to nip the genocide there in the bud when he had the chance. Kofi Annan’s inaction costs the lives of 800,000 Tutsis, and won him a promotion to the rank of U.N. Secretary-General.

In the end, the U.N. is revealed as a stonewalling bureaucracy in thrall to the wealthy and powerful, so intent on keeping up its façade of international equanimity that little effort is made to fulfill its charter. Talk about prime real estate that could be much better served as low-income housing. You’ll never look at the U.N. the same after seeing this film.

Listed below are links to weblogs that reference U.N. ME: