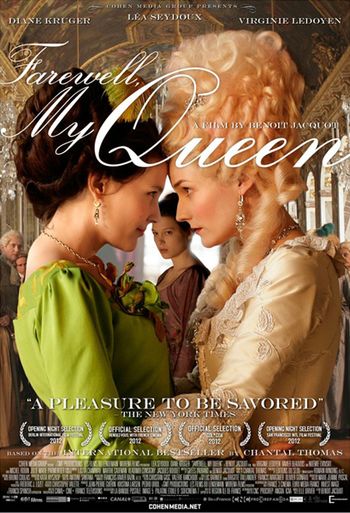 Marie Antoinette takes on the façade of lesbian-rebel-savant in Benoit Jacquot’s nuanced cinematic rendition of Chantal Thomas’s novel. The graceful period drama occurs during Marie Antoinette’s waning days at Versailles (July 14 to 17, 1789) when the French Revolution was just gearing up.

The opulent halls and grounds of the majestic Palace of Versailles make for an intrinsically cinematic staging. Inside the Petit Trianon, Marie Antoinette (Diane Kruger) takes notice of her “personal reader” Sidonie Laborde’s ample cleavage when the young woman comes to read to the Queen as she lay on her daybed. The microcosm scene manifests the emotional weight of the story.

The bare-footed Queen Antoinette takes notice of the mosquito bites Sidonie (Lea Sidonie) scratches, and calls for her ever-near assistant to tend to them. Such improper intimacy between a Queen and her reader are unheard of, and so excite Sidonie’s imagination — the audience’s imagination — however exaggerated that expectation might be.

Diane Kruger’s Marie Antoinette is a fickle, possibly bi-polar, creation. Her material and sensual obsessions turn coldly, if not judiciously, practical after the storming of the Bastille when she realizes she must escape from Versailles. Sidonie’s consequent epiphany about the Queen’s Sapphic relationship with the Duchess Gabrielle de Polignac (Virginie Ledoyen) only fuels her daydreams more about what might be possible for her relationship with the Queen. Sidonie is so blinded by her own tempestuous desire that she fails to complete a vital assignment given her by the Queen.

“Farewell, My Queen” shares a kinship with “My Week With Marilyn” in that both films capture the all-enthralling sensual attraction of a lower class member of society to an impossibly looming cultural figure. While the connection between Marie Antoinette and her hopeful assistant advances nowhere near the intimacy that occurs in “My Week With Marilyn,” the movie embodies a carnal paradox elevated by social crisis. The ensemble performances are solid, as is the film’s terrific production and costume design.