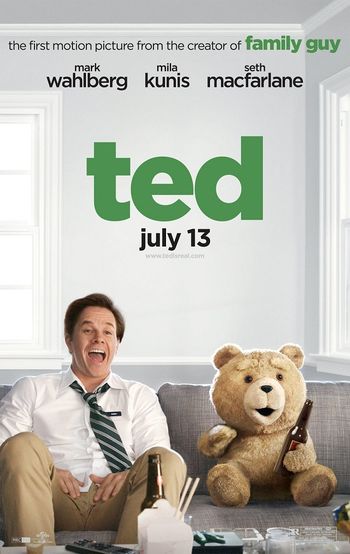 Writer-director-actor McFarlane turns a corner into live action feature films with a smack-talking teddy bear appropriately named Ted (hysterically voiced by McFarland). As the film’s preamble narration informs us, Ted is the result of a little boy named John’s Christmas wish in 1985.

Flashbacks show Ted’s quick rise to national stardom that placed him on Johnny Carson’s “The Tonight Show.” However, Ted’s days of talking-stuffed-bear celebrity are long behind him. Now, 27-years since he was “born,” Ted and his lifelong pal John (Mark Wahlberg) indulge in wake-and-bake bong sessions before John heads off to work for a Boston rental-car agency. John’s four-year relationship with his warm-hearted girlfriend Lori (Mila Kunis) demands that he do some growing up. Wedding bells should be on the horizon, but John still loves sharing endless inside and outré jokes with Ted, who talks like an old-school Boston geezer.

Much of the film’s humor derives from snappy one-liners — many of which poke fun at Boston’s infamous racist mentality. “Jews,” “blacks,” “white trash bimbos” and “Mexicans” are targets. Although never mean-spirited, certain jokes will sting audience members unprepared for McFarlane’s take-no-prisoners humor. McFarlane’s bawdy wit is deceptively sophisticated even if a goodly dose of it derives from sexual, scatological, and fart absurdity. 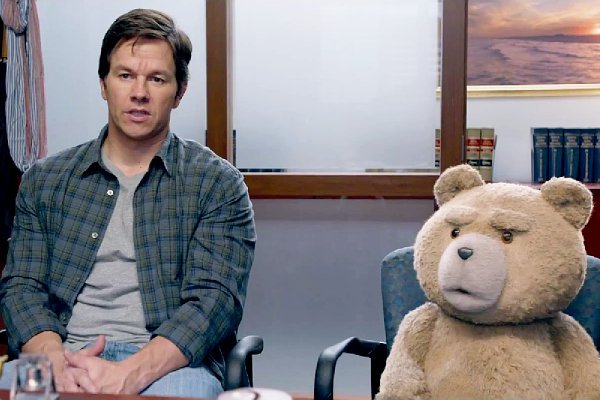 McFarlane writes likable characters. Ted, John, and Lori are self-effacing in spite of their prevailing character traits — a talking stuffed animal, a good-looking guy with a quick wit, and a hot chick, respectively. The joke-heavy movie is balanced with slapstick humor that extends to a comical fistfight between Ted and John in a hotel room that doesn’t fare so well. The two-foot high Ted packs a punch.

Non-sequitur cultural icons get put through McFarlane’s comic blender. Nora Jones, Tom Skerritt, and television’s Flash Gordon actor Sam Jones all get a light roasting. “Ted” is an R-rated romantic comedy with a clever hook. There’s just something funny about a stuffed animal who likes to have sex with loose women even if he doesn’t have genitals.