“Goats” is an amateurish coming-of-age movie made up scattershot ideas that are never developed. If you’re looking for some kind of narrative link to the film’s simplistic title — don’t.

The half-hearted movie is based on screenwriter Mark Jude Poirier’s novel. 15-year-old Ellis (innocuously played by newcomer Graham Phillips) must leave the eccentric company of his selfish New Age mom Wendy (Vera Farmiga) and her “wise” pot-growing landscaper Goat Man — aka Javier (David Duchovny). Goat Man does indeed keep a couple of goats on the dysfunctional family’s Tucson farm. The time has come for Ellis to go off to college prep school at Gates Academy in D.C., leaving behind his surrogate father figure Goat Man. Ellis has studied at the feet of Goat Man during pot-fueled treks around Arizona’s barren topography, and is now ready to venture out into the academic world where his wealthy biological dad Frank (Ty Burrell) prepared for college. 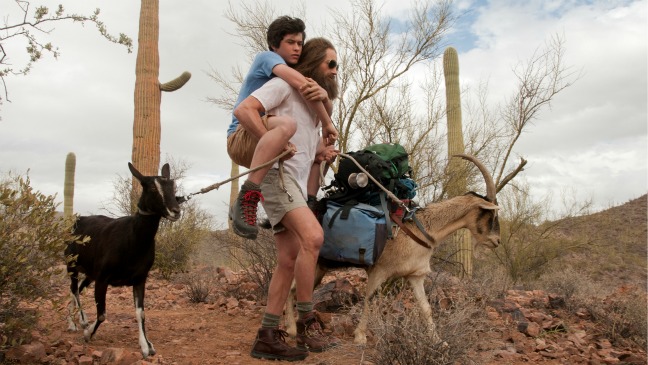 Every plot element comes across as incidental if not entirely irrelevant. Ellis gets a crush on a girl (Dakota Johnson) who interlopes on campus as a small-time prostitute. The subplot’s unsatisfying resolution arrives with a similar effect as every other disjointed even that transpires in this instantly forgettable movie. “Goats” is a would-be stoner movie with no contact-high.