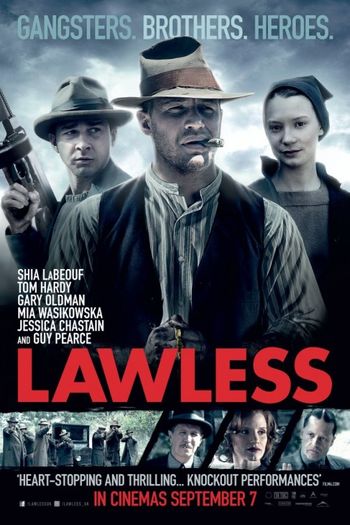 Ardent sincerity by a talented ensemble obfuscates the film’s more risible aspects. Guy Pearce’s shrill portrayal of Special Deputy Charlie Rakes, a corrupt Chicago lawman on a mission to eradicate Franklin County of its many bootleg still operations, is laughable nevertheless. Rakes is a sexually conflicted dandy right out of J. Edgar Hoover’s playbook. The character may as well have a “V” for villain stitched across his chest.

The height of Prohibition, circa 1931, makes a profitable living possible for a cloistered community of backwoods “hillbillies” who would otherwise have no way to subsist. Moonshine stills light up the side of a mountain like “lights on a Christmas tree.” Benoit Delhomme’s evocative cinematography captures a timeless quality that registers as Virginia, although the movie was filmed in Georgia.

The Bondurant brothers — Forrest (Tom Hardy), Howard (Jason Clarke), and Jack (Shia LaBoeuf) — have a widespread reputation as the most feared clan of moonshiners in the region. Forrest likes his brass knuckles. As with most of the characters Tom Hardy creates, Forrest has a presence that resonates throughout even when the character isn’t onscreen. The notorious siblings even sell their famously potent jars of white lightening to local good ole boy police officers until the fey Charlie Rakes arrives with his own crew of “law” enforcers to take a cut of the local economic pie. Every other moonshiner might be willing to play ball with Deputy Rakes, but the Bondurants refuse to share. The battle lines are drawn. Much blood will be spilled.

Gary Oldman chews his limited share of the scenery as Floyd Banner, a big time Chicago mobster with whom Shia LaBoeuf’s Jack does business with after narrowly avoiding a premature burial. Oldman’s character is crucial to the story because Floyd Banner represents an urban version of the outlaw that Jack aspires to be like. Jack inches out Forrest as the story’s main protagonist. He starts out as a wimp who finds inner strength through his latent ambition. While not the best casting choice for the role, LaBoeuf delivers a competent performance.

Jessica Chastain and Mia Wasikowska cast glows of womanly perspective as objectives of desire for Forrest and Jack, respectively. Chastain especially adds dimension to the film for her character Maggie’s bold resolve to work for the gang at the gas station they own, and romantically align herself with the stoic Forrest. The slight allusion to Bonnie and Clyde is unmistakable. “Lawless” never pretends to be anything more than a revved up period-piece gangster movie. If the movie takes a few too many liberties regarding the survivability of its invincible leading characters, the trespass is forgivable.

Listed below are links to weblogs that reference Lawless: