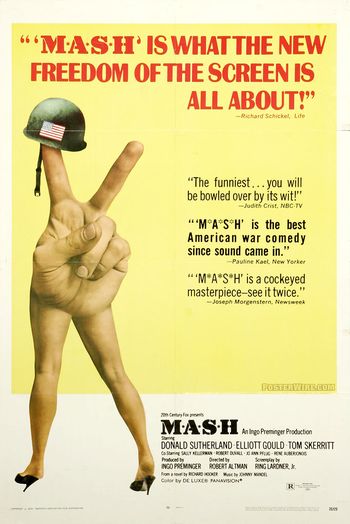 “Suicide is painless. It brings on many changes, and I can take or leave it if I please.”

Director Robert Altman’s 14-year-old son Mike Altman wrote the lyrics for the recurring theme song that gives “M*A*S*H” its narrative core. The refrain is especially significant because it carries the film’s theme of wartime alienation much more so than is represented in the explicit dialogue any of the characters, despite the African-American soldier who sings the haunting lyric during the film’s keystone sequence.

Though a Douglas MacArthur intro-quote attributes the story’s 4077th Mobile Army Surgical Hospital unit to the Korean War, there is never any question that Altman's real setting is Vietnam. Army helicopters deliver a constant stream of horribly wounded soldiers. An indicator regarding the film’s leftist philosophy derives from screenwriter Ring Lardner, Jr.’s participation in adapting Richard Hooker’s novel “MASH: A Novel About Three Army Doctors.” Lardner was one of the few blacklisted victims of Senator Joseph McCarthy’s “Hollywood Ten” to regain an active career in Hollywood, thanks in part to Altman.

“M*A*S*H” ruthlessly satirizes the hypocritical U.S. military, and by extension the U.S. Government, for its systemic barbarism and arbitrary means of doling out draconian punishments to friends and foe alike.

Surgeons Hawkeye Pierce (Donald Sutherland), Captain “Duke” Forest (Tom Skerritt), and Trapper John McIntyre (Elliott Gould) form a trio of anti-establishment anti-hero protagonists. Freshly stationed in the 4077th, the medical specialists work long hours tending to American soldiers with critical injuries. Altman takes great care while exploring the bloody working conditions of the mobile Army hospital where limbs are sawed off and uncountable patients never regain consciousness. The casual tone between the doctors and nurses during long operations is muted to a soothing murmur. In order to maintain their sanity amid so much death and putrid conditions, the doctors and nurses seek refuge in every kind of distraction available. Bawdy jokes and sexual encounters help alleviate the oppressive atmosphere. Ritual drinking and elaborate practical jokes take on an inordinate amount of importance in the lives of a crew weeded out by their complementing quirks. Cruel to be kind, the unit’s members indulge in epic humiliating pranks, as when they broadcast a lovemaking session between a religion-obsessed Major (played by Robert Duval) and a newly assigned chief nurse over the camp’s PA system. 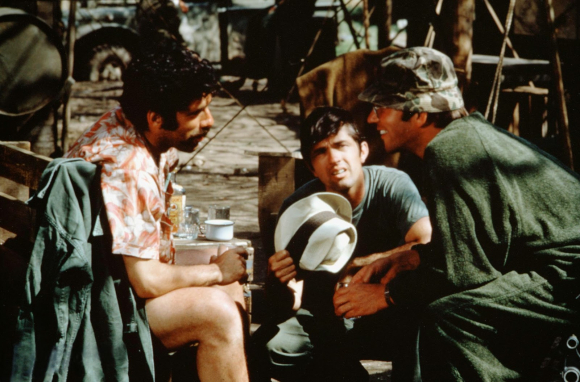 Hawkeye and Trapper live by their wits. Their elevated skills as surgeons inform their similarly keen senses of humor. The only thing that keeps them from being hauled off by military police to be court-martialed for their insolent behavior is their ability to beat the system at its own game. It’s no wonder that the film was transposed into one of the most successful television shows of all time.