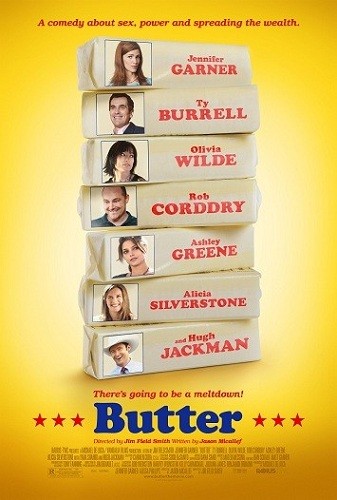 Lo-fidelity political satire arrives with a burlesque rim shot and some kooky butter sculptures in Jim Field Smith’s bawdy feature debut. Iowa family woman Laura Pickler (Jennifer Garner) suffers from the same kind of blind political ambition that attracted Barak Obama to the White House. Like Obama, Laura Pickler is all surface and no substance; she’s a political dilettante who simply wants to bask in the political spotlight. Like Sarah Palin, Mrs. Pickler wears her Americana values like Girl Scout badges guaranteed to promote her to the lofty position of Iowa Governor, and beyond. She doesn’t have a plan or a story, just plenty of self-serving motivation.

Laura’s butter-carving master hobbyist husband Bob (Ty Burrell) has lorded over the town’s annual contest as the “Elvis of Butter.” Locals still rave about Bob’s sculpted yellow depictions of The Last Supper and a scene from “Schindler’s List.” Tasty if not tasteful. Laura sees red after Bob agrees to step down from participating in the contest rather than continue to hog the local glory with his laudable butter-sculpting skills. Besides, Bob has other things to keep him busy, such as lap dances with Olivia Wilde’s home-wrecking harlot Brooke.

Hugh Jackman makes a hilarious appearance as one of Laura’s former boyfriends, whom she turns to for an illicit favor after taking over hubby’s butter-carving duties. It seems a young adopted African-American girl has some mean sculpting skills of her own to go along with a considerably more editorial eye than Laura Pickler. To read too much into the film’s lighthearted pokes at the nature of American political greed is a mug’s game. Everyone knows capitalism is a racist construct to begin with. It’s funny watching an African-American girl turn “the white man’s burden” on its head.

Listed below are links to weblogs that reference Butter: