« DIANA VREELAND: THE EYE HAS TO TRAVEL | Main | HOW TO SURVIVE A PLAGUE » “End of Watch” is a gritty brief apologia from writer-director David Ayer for his less than complementary Los Angeles copsploitation films “Training Day” and “Harsh Times.” Where those films depicted the underbelly of LA cops as drug-crazed thugs no better than the criminals they pursue, here the boys in blue are framed as decent individuals doing an impossibly dangerous and disorienting job. But apologias are not David Ayers’ forte. Plot holes and plot leaps proliferate around Jake Gyllenhaal and Michael Pena, a couple of South Central patrol cops with a knack for stumbling into colossal trouble. The drama excels in the pitch-perfect dialogue between officers Taylor (Gyllenhaal) and Zavala (Pena), two brothers of the badge who share a loyal and frequently humorous bond. Ayer has clearly done serious research to exactly nail down the official and unofficial slang that Los Angeles cops use to communicate in verbal shorthand.

Ayer employs an erratically accessible film-within-a-film device that has officer Taylor using a combination of camcorder and clip-on pocket cameras for he and Zavela to record thier police activities for a college course Taylor is supposedly taking. And yet, we never see him attending any classes. As such, the cop-as-amateur-filmmaker trope doesn’t suspend much disbelief. In some nighttime scenes Ayer goes so far as to use a night-vision camera that puts his subjects under a glowing negative relief visual audiences will associate with military convention. If anything, these point-of-view camera effects distract more than they add to the violently charged action at hand. Taylor and Zavala like to poke fun at one another. They like to dish about their women. Zavala is happily married to his high school sweetheart. She has a bun in the oven. Taylor is tired of repeating his worn-out dating routine, which goes from a “respectful kiss” on the first date to “carnal knowledge” on the second, to “a couple of bootie calls” before coming to an abrupt halt. Anna Kendrick plays Janet, a vivacious and confident young woman who wins Taylor’s affection — body and soul. Although Kendrick adds a lot to the film, one major plot problem emanates from the couple’s relationship, which goes from zero to married without much narrative attention. The couple’s wedding scene seems to come out of nowhere. 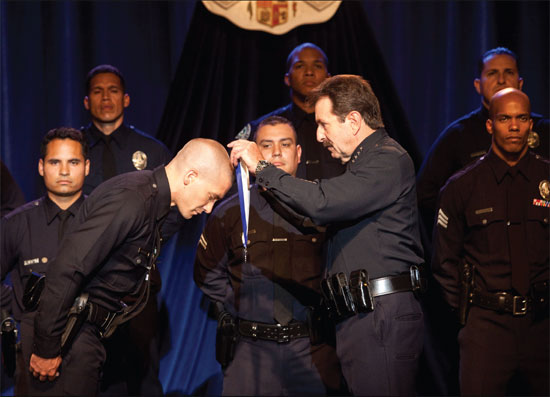 A similar issue of underdeveloped plot construction lingers over a story involving illegal immigrants and a Mexican drug cartel. The officers discover an outrageously distressing example of human trafficking that seems to provide the movie with a thematic goal. And then — nothing. The same goes for the copious drug smuggling evidence they run across during a routine door-knock. Severed body parts serve as some kind of grotesque warning at the crime scene.

Finally, the film’s bloody denouement is built on a cartoonish gang of cholo thugs led by a tough chic who swears she is prepared to “do the time” for the murderous crime she intends to commit. The crew has it in for Taylor and Zavala for some overblown reason that is never adequately explained. 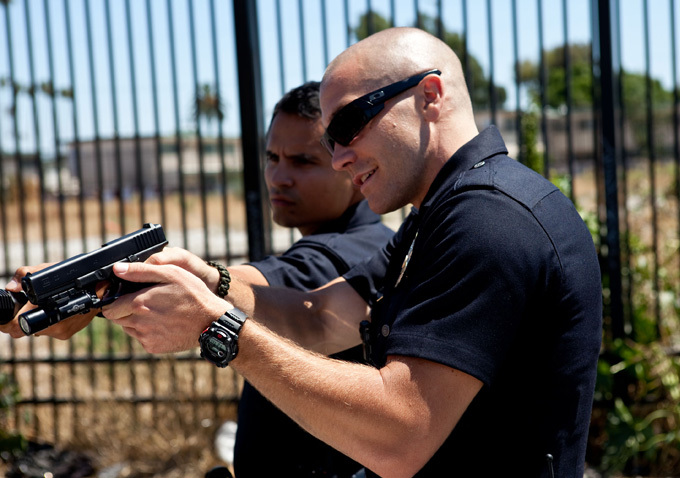 Despite its flaws “End of Watch” is nonetheless entertaining for the praiseworthy performances of its ensemble. Gyllenhaal and Pena are exquisite together, and Anna Kendrick works her disarming charm to every advantage. The question remains: what made David Ayers turn from anti-cop propaganda to pro-cop propaganda? Perhaps his next copsploitation effort will help answer the question.