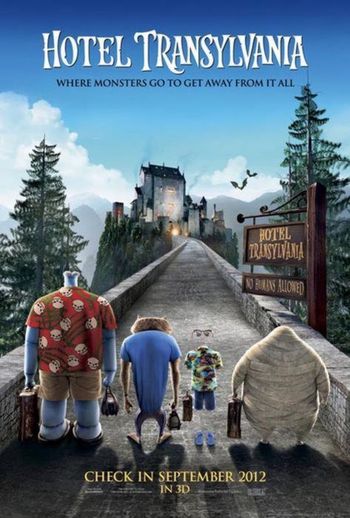 Partying with Dracula and his crew of monsters isn’t as enjoyable as you might imagine in this animated misfire. A threadbare script sets an oversimplified plot adrift. Adam Sandler does a half-decent vampire voice as Dracula, an overprotective single father to his 118-year-old daughter Mavis (voiced by Selena Gomez). In human years, Mavis is just college-age. Good ole Dracula has built a secret monster resort hotel. Humans are not allowed. Dracula has gone so far as to build a phony human town in order to convince Mavis not to stray beyond their castle walls. Enter American back-backer Jonathan (voiced by Andy Samberg), who wanders into Dracula’s sacred hotel and sets romantic eyes on Mavis. She returns the gesture. Mindless monster mayhem abounds as the rudderless story chases its tail toward a predictably anticipated ending.

Once again, Hollywood dips its toe into 3D waters without fully committing. There is nothing in the 3D effects on display to say that any value is added by its presence. “Hotel Transylvania” is a lethargic animated comedy with nothing at stake — not even any vampires.

Posted by Cole Smithey at 09:26:36 PM in Animation, Children's Cinema

Listed below are links to weblogs that reference HOTEL TRANSYLVANIA: