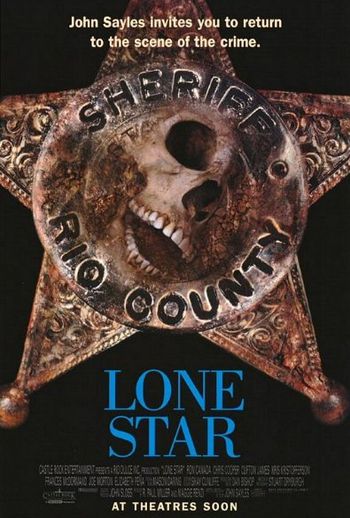 One of several of writer-director John Sayles’s masterpieces —alongside such unforgettable films as “City of Hope,” “Matewan” and “The Secret of Roan Inish” — “Lone Star” is an absorbing neo-Western mystery told in a haunting magical realist tone.

Deep layers of social commentary surround the story’s real-life historic underpinnings. The white man’s brutal colonization of Texas proves to be an ongoing, unfinished battle. The film is also an immigrant’s story. Sayles adopts elegant time flipping segues toward an epic cross-generational and cross-cultural narrative about hard-won legacies for the people of a border town called Rio. Flashbacks arrive as vividly expressed memories, occurring in the exact physical places where tragic events occurred a generation ago. The dynamic flow of cinematic logic expressed through Sayles’s own brilliant film editing, accommodates his talented cast’s penetrating performances. The cumulative effect is intoxicating. The discovery of a partially buried skeleton in the middle of a long-abandoned desert Army firing-range piques the curiosity of '90s-era sheriff Sam Deeds (Chris Cooper). The son of the town’s mythologized '60s-era sheriff Buddy Deeds (Matthew McConaughey), Sam has personal reasons to suspect his deceased father of murdering the victim — the town’s racist sheriff, Charlie Wade (Kris Kristofferson), four decades earlier.

“When legend becomes fact, print the legend” — taken from John Ford’s "The Man Who Shot Liberty Valance” — describes the droning public party line Sam comes up against regarding his lionized father. Everyone refers to Sam’s deceased mother as a “saint,” a response that Sam noticeably mocks with an air of cynicism. Chris Cooper’s purity of intention in the emotionally conflicted role is indisputable.

Sam’s investigation takes on metaphysical shape as he’s mentally transported to past events leading up to Sheriff Wade’s murder. Kris Kristofferson’s one-man mafioso Sheriff Wade likes to take out his misplaced aggression on Rio’s black, Mexican, Indian, Seminole, and Spanish citizens. Sometimes he indiscriminately uses his pistol. A lot of people had reason to stop him in his tracks. A through-line of social realist historic context pervades every character we come in contact with. Joe Morton’s stern Army colonel Del carries his hard-ass military persona as a chip on his shoulder due to his bar-owner father Otis’s (Ron Canada) absence when Del was growing up. “Big O,” as he’s called, runs the area’s only bar for blacks in the region dating back to when Sheriff Wade reigned. Happily married Otis has been on his own journey through the region’s history. He keeps an impressive photo collection of native leaders who bravely fought against the U.S. Army during the days of the Alamo.

Sam’s agenda-driven inquiry coincides with his ardent romantic pursuit of his high school sweetheart Pilar (Elizabeth Pena). Pilar works as a schoolteacher. The couple’s developing relationship provides the film with a thematic bombshell. The revelation comes as the second punch to a double climax that extends the story’s reach far beyond the film’s last frame. 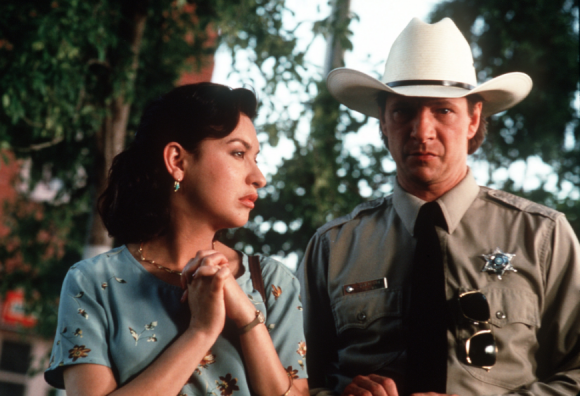