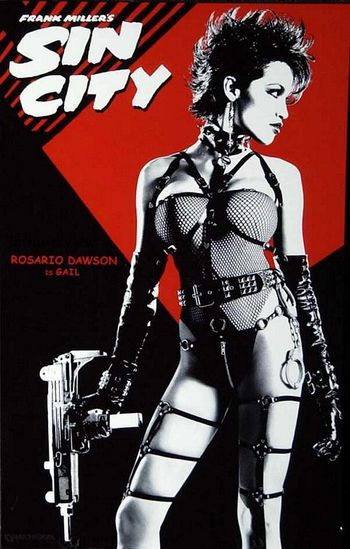 Director Robert Rodriquez collaborates with Quentin Tarantino to create a personalized format of dark animated expression. They use negative imagery with accents of color (especially blood-red) to emphasize character traits, and show the cartoon action exactly as Miller originally drew it.

Frank Miller’s participation with Robert Rodriquez in the film’s production speaks to the clarity of vision on display. The filmmakers’ dynamic use of green-screen technology to flesh out the story’s urban terrain is stunning. Black-and-white characters bleed bright white blood from black bullet wounds. This really is eye-candy.

Mickey Rourke, Bruce Willis, Benicio Del Toro, Clive Owen, and Jessica Alba pop from the screen as iconic black-and-white characters of a fetishized criminal underworld. The vice-riddled narrative weaves together three Frank Miller stories ("The Big Fat Kill," "The Hard Goodbye," and "That Yellow Bastard"). The ink-black shadows that splay across the screen corroborate its characters’ cruel and kind intentions. 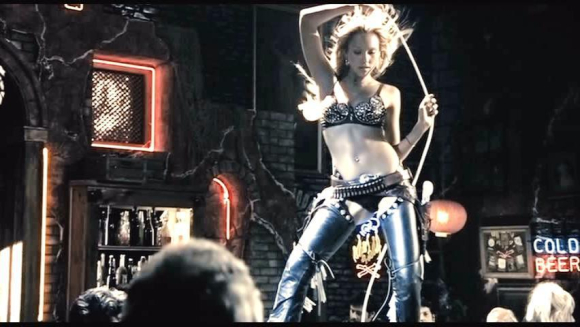 Hartigan (Bruce Willis) is a honest cop who does eight-years of hard time for a crime he didn't commit in order to protect a little girl named Nancy after she's kidnapped by the serial-rapist son (Nick Stahl) of the town's corrupt Senator (Powers Boothe). Corruption drips from every lamppost.

Mickey Rourke steals the show as Marv, a virtually indestructible hulk addicted to violence, booze, and pills. "Marv was born in the wrong century. He belongs on some ancient battlefield, swinging an ax into somebody's face." Marv's taste for blood is piqued after the murder of a hooker named Goldie (Jamie King) who showed him one "night of kindness." Marv sets off on an ass-kicking investigation that finds him torturing guys, like the man Marv drags facedown on the street as he speeds along in his car with the door open. Once Marv locates his serial-killer prey (played by one very tweaky Elijah Wood), it's all about amputation and decapitation. 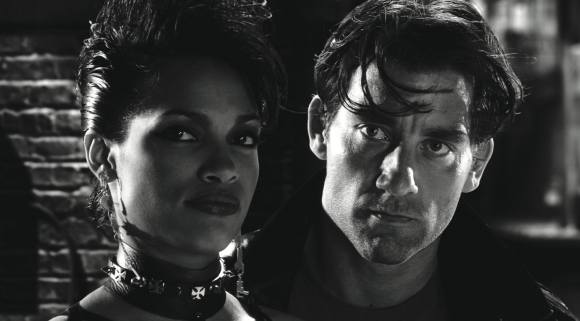 "You've got to prove to your friends you're worth a damn. Sometimes it means dying. Sometimes it means killing a whole lotta people." That's how Dwight explains his philosophy. It's a sentiment that provides a common bond between Hartigan, Marv, and Dwight, while imparting a rough-edged view of the nocturnal world of Frank Miller's deadly protagonists. “Sin City” lives on in your memory like a fantasy nightmare where living people morph into super-action visions of beguiling brutality. 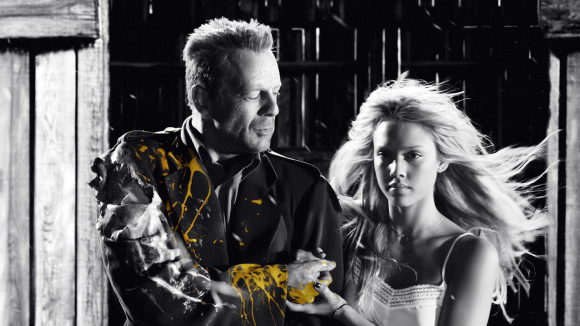