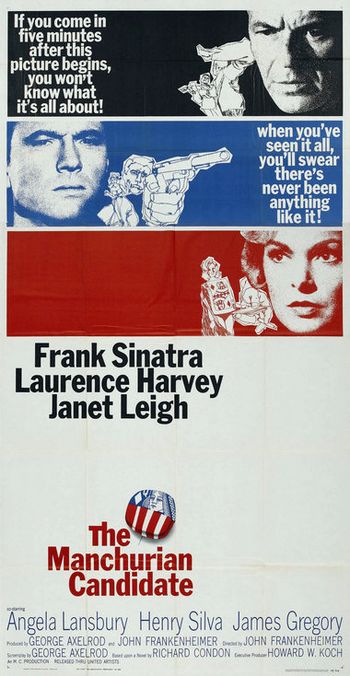 Based on Richard Condon’s 1959 novel, “The Manchurian Candidate” (1962) embodies a uniquely modern political thriller of far reaching implications and remains one of the most influential political films in U.S. history. Its title derives from Manchuria, the historical name applied to the region of northeast Asia where the Korean War occurred.

John Frankenheimer directs with a distinctive complexity of visual depth and a surreal tone of lurking menace. The story opens with an American military company being captured by Communist Chinese soldiers after being sold out by their double-crossing Chinese guide. Frank Sinatra plays one of the patrol’s soldiers. Credits roll before introducing Laurence Harvey’s brainwashed character Raymond Shaw, a rescued prisoner of war returning home to the States where a gaggle of reporters gather on an airport tarmac to document his celebrated return. Winner of the coveted Medal of Honor, cynical Raymond has no use for the false patriotism covertly bestowed on him by his politically ambitious mother Eleanor (Angela Lansbury). Raymond’s smarmy stepfather Senator John Iselin (James Gregory) is a Joe McCarthy clone. Eleanor instructs the Senator’s televised acts of Communist witch-hunt provocation. We glimpse the incestuous nature of Eleanor’s relationship with Raymond during a full-mouth kiss that may as well be a kiss of death.

Frank Sinatra’s participation as the story’s perceived protagonist Major Bennett Marco was cardinal to the film’s production. None of the studios wanted anything to do with the picture until Sinatra signed on. United Artists took the bait.

Like the fellow brainwashed members of his imprisoned battalion, Major Marco is haunted by a recurring nightmare that morphs between a garden club party attended by a group of little old ladies, and a lecture given by a Chinese psychiatrist Dr. Yen Lo (Khigh Diegh). In the dream, the psychiatrist orders Staff Sergeant Shaw to strangle one of his fellow officers — a task he calmly carries out with a knotted scarf. Raymond plays part in a similar “demonstration” wherein he shoots the troop’s youngest member in the head without emotion. Nonetheless, Raymond Shaw’s former fellow soldiers refer to him as “the kindest, bravest, warmest, most wonderful human being” they’ve ever known. 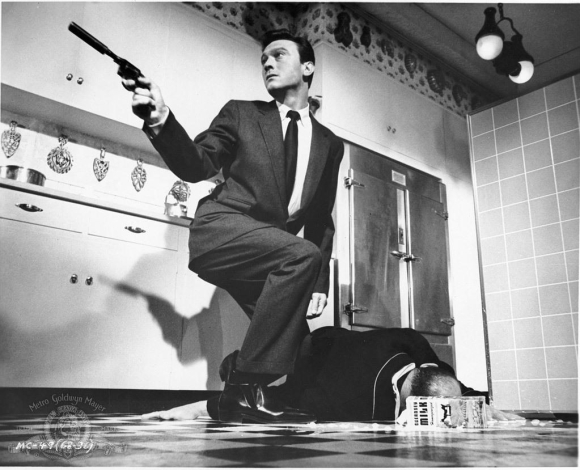 The lasting effects of Raymond’s mental indoctrination are triggered whenever his manipulators suggest he “play a game of solitaire.” The sight of a queen of diamonds face card puts him in a trance, under which he is capable of anything — including walking into a freezing cold lake in Central Park or assassinating a presidential candidate.

Like Roman Polanski’s “Rosemary’s Baby,” “The Manchurian Candidate” presents a vision of dark conspiracy that permeates every atom of reality. The unsettling film added fuel to the fire of the many conspiracy theories surrounding the Kennedy assassination, which took place a year after its release. Frank Sinatra went so far as to purchase the rights of the film to keep it out of circulation from 1964 to 1988. In 2008, rumors circulated that John McCain had been indoctrinated, "Manchurian Candidate"-style, during his stay at the Hanoi Hilton. 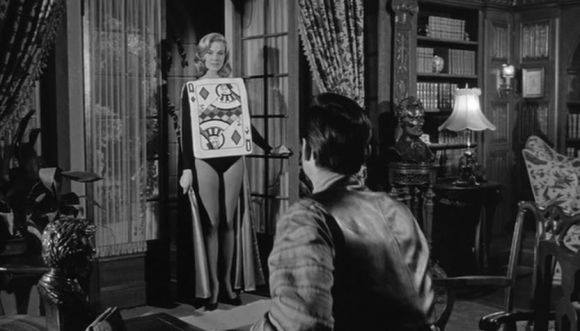 Posted by Cole Smithey at 01:40:55 PM in Political Thriller