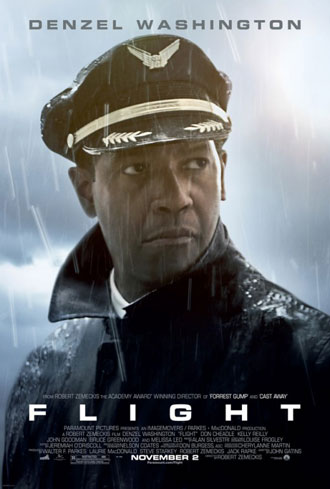 Down In Flames
Robert Zemeckis Burns the Popcorn

Enjoyable in that Hollywood-popcorn way for which Robert Zemeckis is famous— see “Who Framed Roger Rabbit,” skip “Forest Gump” — “Flight” is a drama that would have been better without the director's love of schmaltz. Featuring one of the most terrifying plane crash sequences ever filmed, the movie sets up Denzel Washington’s character Captain Whip Whitaker as the narrative’s protagonist-antagonist rolled into one. Getting two-for-the-price-of-one, the audience is taunted as whether or not to root for this unapologetic alcoholic commercial pilot who saves most of the plane’s 102 passengers during a crisis that would have killed them had the plane been helmed by anyone else. Whip was toasted — on booze, pot, and cocaine — when he pulled off an unconventional “inverted” flying maneuver that allowed him to (mostly) successfully crash-land the huge plane in an empty field. 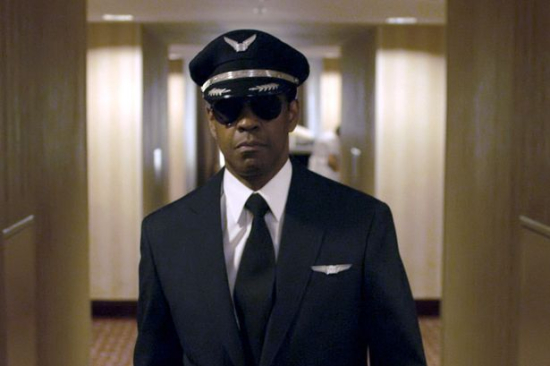 “Flight” is worth seeing, if only for its incredible crash sequence, and for the reliable Denzel Washington’s performance. Denzel Washington remains true to his role even in the face of all the character and plot-breaking going on around him. He doesn’t just bring out the humanity methodically buried inside Whip’s melancholy soul — he brings out an indomitable rebellious nature that’s always present in the characters he builds. His work is never less than precise. Washington is a great actor at the mercy of a Hollywood system that is only occasionally able to provide a vehicle that lives up to the conviction of his talents. “Mo’ Better Blues,” “Training Day” and “American Gangster” come to mind.

Zemeckis gives John Goodman’s hippie drug-dealing character Harling Mays a royal musical intro — the Rolling Stones’ “Sympathy for the Devil” — every time Harling arrives to supply Whip with whatever cocktail of drugs the legally-embattled pilot needs. The film’s jokey treatment of Goodman’s supporting character breaks the otherwise dramatic tone of the film. Big mistake. The movie would have been vastly improved had Goodman’s scenes been relegated to the cutting-room floor. 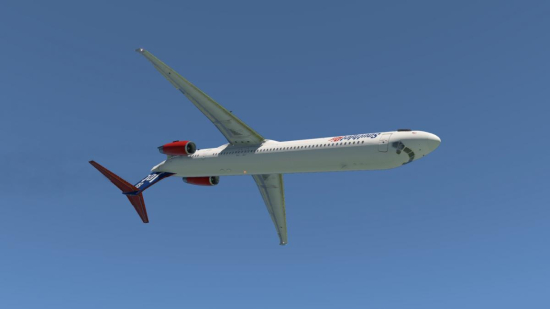 With lightweight scripts such as “Summer Catch” and “Real Steel” on his resume, screenwriter John Gatins doesn’t display the necessary restraint to sustain a consistent dramatic tone. His intentionality is too jokey for the task. He plays his characters too lose. When Whip makes a hospital visit to the permanently injured co-pilot he was flying with during the crash, the scene digresses into an off-kilter praying session that either mocks Christianity, or makes fun of the filmmaker’s lacking ability to express himself — depending on your perspective. Either way, something smells fishy. 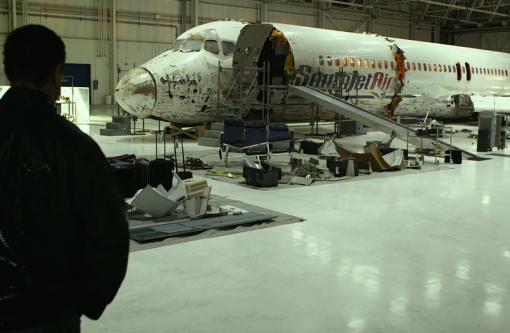 The story also goes astray in numerous poorly planned plot twists, such as the failure of the hard ass attorney assigned to Whip’s case to protect his client from himself. A locked-door rehab program would have done the trick. Don Cheadle is burdened as counselor Hugh Lang, a character who contradicts his own personality as soon as it’s established.

As it unravels, the overlong movie slips into an ethical grey area that leads the audience to favor irresponsible behavior. Here is a film that’s unclear on every concept of morality it puts forth.