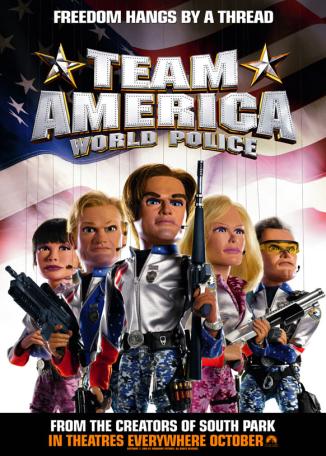 This all-out adult satire pulls no punches and takes no prisoners. The greatest gift that Stone and Parker possess is their inexhaustibly brash approach to big issues. Although they’ve said in interviews that “Team America: World Police” mocks terrorists rather than the war on terror, the film ends up—and correctly--ridiculing George W. Bush’s fantasy-branded “war on terror.”

The movie slyly acknowledges multinational global corporate oppression — that there can be no such thing as a war on terror, just as there can be no war on the desperation that drives marginalized people from committing acts of abysmal anxiety. When our puppet commandos kick off "Team America" by killing a group of Muslim terrorists in Paris, they consequently destroy the Louvre Museum and kill many French civilians as a consequence. It’s no accident that the French are the first to suffer at the hand of America’s fraternity minded group of mercenary champions with ammo belts hung across their chests to preclude any confusion about their heroes’ agenda. 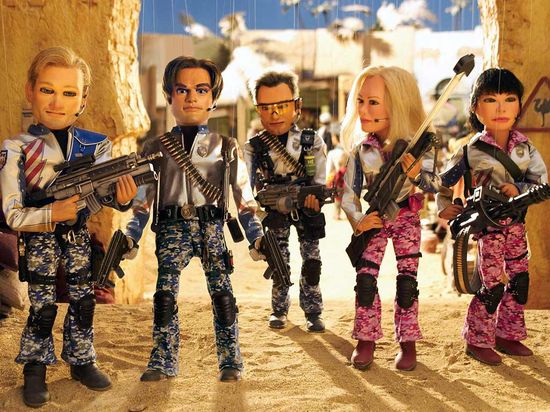 Liberal doses of crude vulgarity that Stone and Parker smear over everything are keen equalizers that go deeper than party lines or class striations. The purely filthy satire enters your central nervous system in coded systems of pop culture references that expand in your subconscious. It’s a thoroughly integrated brand of intoxicating anti-propaganda that sparks from everything you already know on an intrinsic level. Think of it as comedy by osmosis.

No quarter is given to corporate shills like George W. Bush or John Kerry, or to puppet enemies like Bin Laden or Hussein. Instead the filmmakers go right for the jugular of North Korea’s Kim Jong Il as a lonely dictator baddie who feeds UN Weapons Inspector Hans Blix to a shark. That scene won’t stick in your memory as much as the much-debated hilarious puppet sex scene, but the film’s final explanation of the world’s problems as based on assh*les, puss**s, and di*ks, surely will. 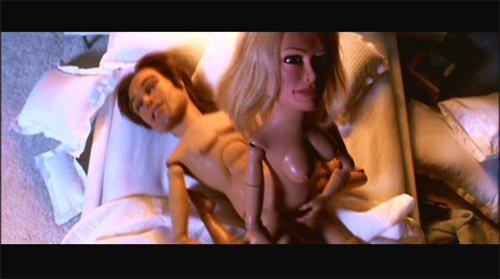 Posted by Cole Smithey at 02:00:41 PM in Animation, Political Satire