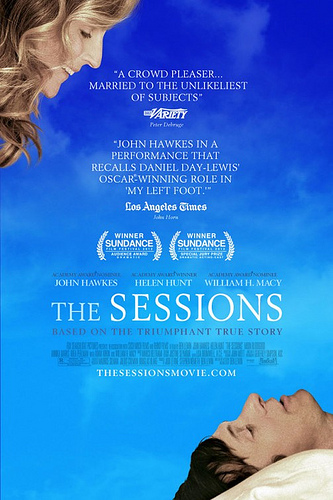 The most unlikely film of 2012, “The Sessions” is a defiant romantic comedy that pushes the boundaries of R-rated intimacy. The film’s sex-positive message is so persuasively articulated that it overrides the material’s pornographic content. Writer-director Ben Lewin based “The Sessions” on Mark O’Brien’s essay “On Seeing a Sex Surrogate.”

That the film’s frank sexual interactions occur between a male polio victim who can only survive outside of an iron lung for a few hours at a time, and his caring sex therapist, adds considerably to its dramatic complexity.

Accomplished character actor John Hawkes is empathetic, but never pathetic as Mark O’Brien, a 38-year-old polio victim who spends his time writing poetry from the iron lung bed in his Berkeley home during the late ‘80s. Barely able to move his body below the neck, Mark is most frequently at the mercy of his immediate caregiver, who massages his muscles and bathes him. In the comfort of his Catholic church, Mark seeks the advice of his local priest/therapist Father Brendan (played for humor by William H. Macy) about firing the brusk caregiver who marginally mistreats him. Macy’s preposterous character serves primarily as an obligatory narrative-framing device. The casting of Macy not the best choice the filmmaker could have made, but it serves its intended purpose well enough.

Mark’s participation in a sex survey about people with disabilities exposes him to the active sex lives of other disabled people. Through the questionnaire he learns about the availability of a sex surrogate capable of ushering him through the loss of his virginity, something that looms large on Mark’s bucket list. Mark’s irrepressible spirit is a force to be reckoned with. Through the assistance of his newly acquired assistants Vera (Moon Bloodgood) and Rod (W. Earl Brown), Mark nervously makes his way to his weekly two-hour sex sessions.

Helen Hunt offers up a beautifully candid and fearless portrayal as Cheryl Cohen Green, the dedicated sex therapist who agrees to meet with Mark for six sex appointments. The weight of the movie rests on Hunt’s ability to open up Mark’s, and thus the audience’s, sense of sexual understanding. The film impressively covers a lot of sex-positive ground during Cheryl’s and Mark’s nude encounters.
The crux of the movie comes down to the beautifully handled sensual encounters between Mark and Cheryl. The brutal honesty on display is refreshing for the generous intentionality behind them. Sex is shown as a good and essential aspect of expression for all people regardless of their situation. Following the recent Meryl Streep and Tommy Lee Jones comedy “Hope Springs,” here is another illuminating movie version of sexual therapy capable of cleansing its audience, regardless of their personal hang-ups.

Listed below are links to weblogs that reference The Sessions: