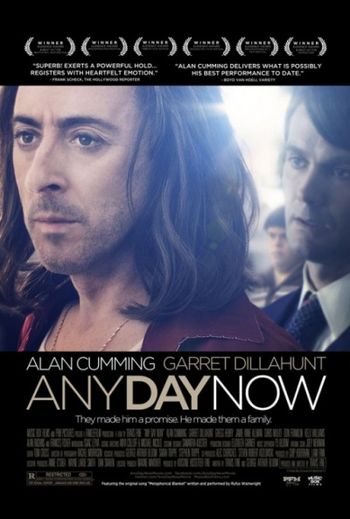 Queens-transplant Rudy lives in a single room occupancy where his drug-abusing neighbor Marianna (Jamie Anne Allman) abandons her mentally challenged son Marco (Isaac Leyva) after her incarceration. Rudy sees through Marco’s disability to the sweet soul that resides within. Indeed, Isaac Leyva's performance substantiates Rudy's insights. A concurrent meet-up between Rudy and Paul (Garrett Dillahunt – “Winter’s Bone”), a gay L.A. district attorney, quickly blossoms into a stable relationship from which the couple attempt to provide a permanent home for Marco.

“Any Day Now” is a powerful independent film that could slip through the cracks. It is also a significant addition to the cannon of LGBT cinema. If you have a chance to see it on the big screen, don’t pass it up. I guarantee you will be moved.

Listed below are links to weblogs that reference Any Day Now: