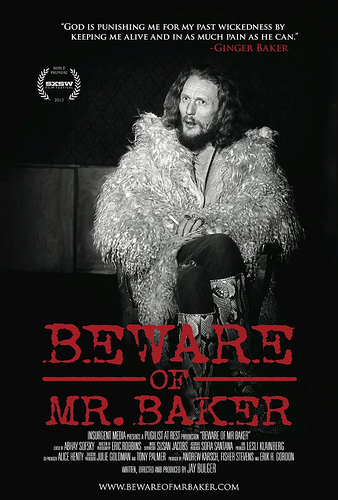 Exceptional. Jay Bulger’s warts-and-all documentary about one of the world’s most enigmatic drummers is as vibrant as its musically prodigious subject.

Bugler spans the globe to retrace Ginger Baker’s wild and wooly musical travels. Baker’s friends and family members pull no punches in describing the man who developed such a toxic reputation that hardly any professional musician would work with him anymore. Acolyte drummers Stuart Copeland, Lars Ulrich, Neil Peart, and Carmine Appice share unbridled praise for their favored innovator.

The upstart director makes expressive use of a primal animation style to emphasize elements from Ginger Baker’s turbulent life story. Obligatory archival clips of Baker playing with bands such as the Graham Bond Organization, Cream, Blind Faith, Ginger Baker’s Air Force, Fela Kuti, and Masters of Reality support the drummer’s repeated claim to his jazz roots. A highpoint comes during dueling drum battles with Baker’s jazz heroes. Elvin Jones, Max Roach, and Art Blakey all participate. Blakey’s performance is especially flashy. There’s no question that Ginger Baker could hold his own with the best jazz drummers in the world.

The film’s apt title derives from a sign posted on the road going to Baker’s home in South Africa where Bugler lived with Baker while making the film. The movie opens with Baker giving Bulger a bloody nose with the handle of his metal cane in an effort to dissuade the documentarian from interviewing ex-wives and other family members for what Baker considers "his" movie. Many of the film’s best bits of information come from Baker’s temperamental outbursts. Baker’s 20-year heroin addiction has left scars. Nonetheless, the excessive substance abuse hasn’t affected Baker’s flawless sense of time and miraculous independent abilities with his four limbs.

Eric Clapton contextualizes Ginger Baker’s contentious personality and subversive mastery of polyrhythms best. As the one person Baker feels is his closest and most loyal friend, Clapton talks about Baker’s “compulsive” nature. It also happens to be a good way to describe the movie.