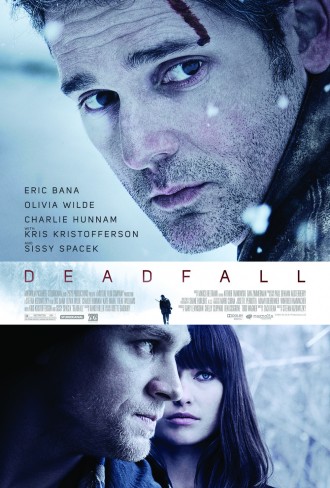 Eric Bana does the anti-hero honors as Addison, a casino thief on the run with a bag of cash and his adoring sibling accomplice Liza (Olivia Wilde). Headed for Canada, the desperate pair loses their getaway driver in an icy car crash that requires brother and sister to split up in Michigan (to have a better chance at making it across the border). Local police have a dragnet out. Liza slips into a romance of convenience with Jay (Charlie Hunnam), a recently released ex-con and former Olympic boxer. Addison has a rougher time traversing miles of snowy terrain. Kate Mara provides a nifty emotional hook as Hanna, the police officer daughter of the local sheriff (played by the ever-watchable Treat Williams).

“Deadfall” isn’t the most original suspense movie in the world, but it accomplishes its genre-minded goals with precision.