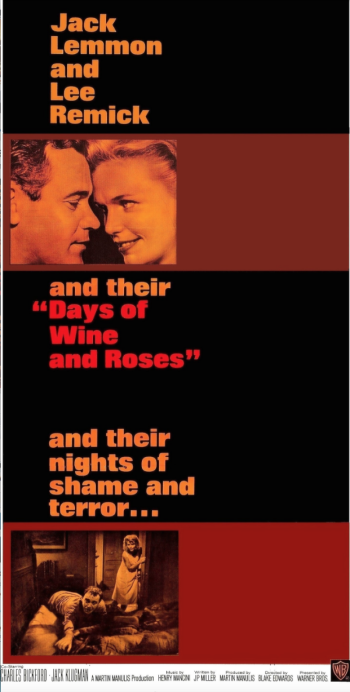 The first film to tackle alcoholism in a serious manner, “Days of Wine and Roses” is a tragic social drama of timeless effect. It remains one of the most heartrending cinematic interpretations of addiction ever produced. No matter how many times you watch it, it’s never an easy experience.

Adapted by JP Miller from his 1958 “Playhouse 90” teleplay, the story follows the rise and fall of a young San Francisco couple exceptionally played by Jack Lemmon and Lee Remick. Two finer screen performances you will likely never see.

Joe works as a glib public relations executive at the same firm where Kirsten is employed as the secretary of the head of the company. For Joe, social drinking is part of the job. “Hit me again” is his catchphrase to bartenders and waiters. Although they get off on the wrong foot when Joe mistakes Kirsten for a party girl he invites to on a harbor cruise for one of his rapacious clients, Joe corrects for his blunder the next day.

An enchanted dinner date allows Joe to induct teetotaler Kirsten into the joys of drinking with a brandy alexander that appeals to her love of chocolate. A post-dinner visit to Fisherman’s Warf sets the tone for the relationship. Kirsten quotes poetry. “They are not long, the days of wine and roses.” Kirsten hasn't had much experience with boyfriends with drinking problems. 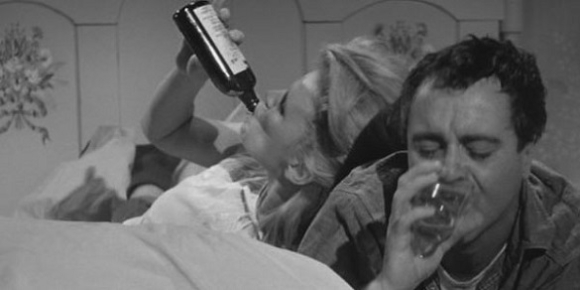 Kirsten’s preference to ignore the dirty water at their feet in favor of looking out to the moonlit bay is inversely mirrored in Joe’s constant attention to the bottle he swigs from. Not even Kirsten’s radiant beauty can distract Joe from his obsession with alcohol.

Joe momentarily exhibits a streak of ethical conduct — however tentatively — when he hints to his boss that he doesn’t want to function as a pimp anymore. Joe and Kirsten get married and have a baby girl. But Kirsten’s decision to follow Joe’s alcoholic lead results in her accidentally setting fire to their plush apartment. The catastrophic event snaps Joe into recognizing their drinking problem. He moves the family to Kirsten’s father’s home for a do-it-yourself rehab program, helping with the old man’s home nursery business.

Two months of hard work and sobriety comforts Joe into believing that a little bender won’t hurt. He pays for his transgression with two months in a hospital sanitarium. When Joe reaches out for assistance, Jack Klugman’s Alcoholics Anonymous sponsor Jim Hungerford arrives to guide Joe on the road to recovery. 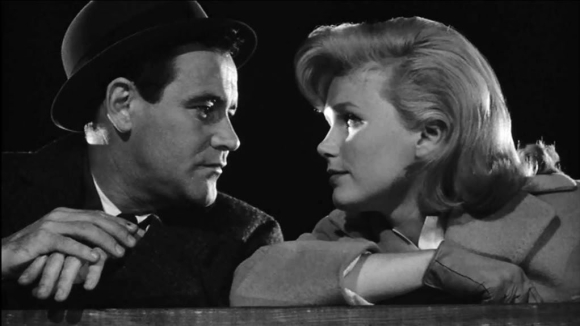 Although director Blake Edwards is heavy-handed in his use of multiple variations of Henri Mancini’s theme song to underscore the drama, the movie goes to depths of humiliation, betrayal, and pain that might otherwise break the audience without the shallow musical commentary. The love that Joe and Kirsten share acts as a cruel tool for the reversals they continue to suffer. The film’s potent tableau encompasses the daily struggle of all addicts, whether recovering or still caught in the grip of addiction. 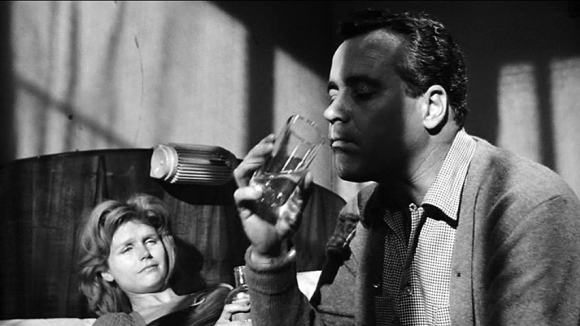