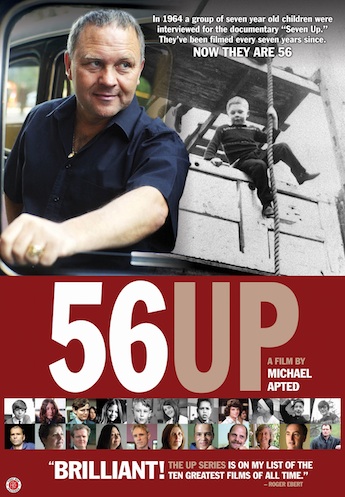 The most important documentary series ever put together marks its eighth milestone with worthwhile results. Director Michael Apted once again returns to chronicle the life-paths of fourteen British people he has interviewed every seven years since beginning the progression under the auspices of Granada Television in 1964. Initially conceived to chart children from opposing socio-economic backgrounds, the series borrows from the Jesuit axiom, “Give me a child until he is seven and I will give you the man.” Followers of the “Up” series will not be disappointed by this opportunity to catch up with a group of familiar personalities who have become like family to many audience members.

Apted sticks to his traditional form, referencing flashbacks made up of chronologically composed clips from past films to give insight into his subjects’ maturing qualities at seven-year intervals.

Underclass Sue never graduated from college. She now savors her position as the main administrator in the legal faculty at Queen Mary College University of London. Sue’s enthusiasm for her job speaks volumes.

Since being raised in a children’s home in England, insecure Paul carries on with his doting wife Susan in Australia. The couple work together helping run a retirement village. They’ve taught their children to live without credit cards. The modest couple cherishes their brood of grandchildren with a sense of gentle but delighted kinship.

Misfit Neil has gone from being homeless to serving as a vivacious member of a small town council as a liberal democrat. He obsessives over his writings, which have gone ignored in spite of the fame the “Up” series has brought him.

A longed-for surprise comes in the guise of Peter, a childhood friend of Neil from Liverpool, who refused to continue participating in the documentary series after “28 Up,” due to death threats that he received as a result of criticism he levied against Margaret Thatcher. Proud of the three-piece band — “The Good Intentions” — he plays in with his wife Gabby, Peter now works in the work and pension department of the Civil Service where Gabby also works.

Upper-class Suzy and Nick visit with one another as compatible pals brought together from participating in the series. They finish each other’s sentences. Nick, an Oxford graduate, exudes an ease of manner that belies his privileged background. Suzy’s bearing is less confident.

The current era’s global economic collapse runs a thread through the film. Cabdriver Tony travels between London and Spain with his wife and family. His canny economic insights from “49 Up” make a impression.

No matter at what point viewers come to the “Up” series, the effect is the same. Each consecutive film reveals more onion-layers in the lives of British citizens whose backgrounds, personal experiences, and individual ideas are organically relatable. I can hardly wait for “63 Up.”

Listed below are links to weblogs that reference 56 Up: