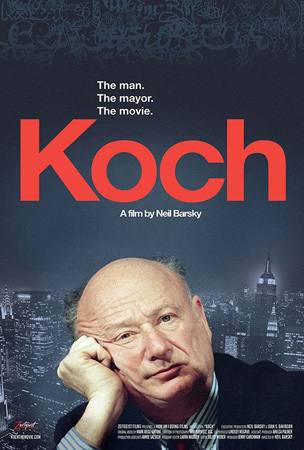 A warts-and-all observation of the rise and fall of one of New York City’s most controversial Mayors, Neil Barsky’s well-paced documentary fills a necessary gap. Famous for contributing to the now-popular anti-union stance endorsed by nearly every regional politician in the country, Ed Koch is shown as a nebbish “liberal” Congressman who ran an improbably successful Mayoral campaign by standing in front of subway stations asking every passerby the nonsensical rhetorical question, “How am I doing?” Perhaps the film’s best side effect is its archive-footage depiction of New York City before corporations wiped out nearly every dive bar and mom & pop store and corner restaurant that once gave the city its vibrant character.

“Koch” gives equal attention to Ed Koch’s good and bad accomplishments during his 11-year reign as Mayor — 1978 to 1989. Koch’s housing renewal initiatives created jobs and housing opportunities. The blind eye that Koch turned to blacks and gays exposed a racist tendency and an element of self-loathing — it has long been widely speculated that Koch is gay. Certainly every politician is a hypocrite, and none more so than Ed Koch. “Koch” skews toward being a cinematic love-letter to its now-elderly subject before all is said and done. Nevertheless, it leaves plenty of space for the interested viewer to read between the lines.

Listed below are links to weblogs that reference Koch: