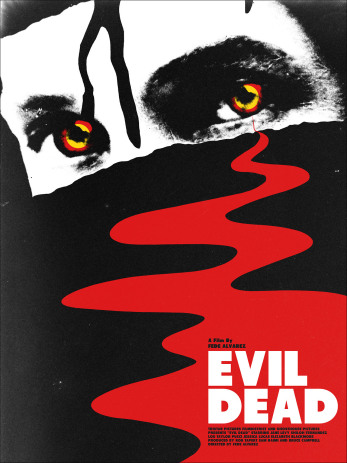 The most shocking aspect of this homage horror movie based on Sam Raimi’s campy 1981 cult classic is its utter lack of wit or humor for which the original is famous. For a movie that’s nothing if not a bloodbath, “Evil Dead” is as dry as the Sahara. That Sam Raimi and Bruce Campbell share producing credits seems to speak more to economic concerns rather than any regard for artistic merit. "The Evil Dead" felt like a well thought-out prank for its audience to share in; "Evil Dead" feels like an eversion therapy punishment for some undeclared sin against the State — drug use perhaps? Written as is — by Fede Alvarez and Rodo Sayagues — there is no place for the iconic B-movie sensibilities that Bruce Campbell brought to his character in the 1981 version.

Although it stays fairly true to the skeleton plot outline of the original, “Evil Dead” lacks panache. Where the imaginative special effects of Raimi's movie elicited smiles, there is no such pleasure to be had here. Gone is any remnant of the slapstick humor that filled the film's far superior inspiration. There's no character to root for. You just keep looking at your watch, waiting for everyone to finally die, die, die.

The irony is that “Evil Dead” adheres to modern day horror clichés adhered to by the likes of hipsters such as Rob Zombie. It's as unoriginal as they come. Sure, there are plenty of gory displays of dismemberment and flesh-puncturing episodes, but without a sense of fun and excitement “Evil Dead” is a morose throwaway exploitation flick. A few Exorcist-inspired lines of twisted demonic dialogue is as close as “Evil Dead” comes to delivering the cheap and goofy thrills that fans of the first movie will come to see. Don't come looking here for fun; you won't have any.

Listed below are links to weblogs that reference Evil Dead: