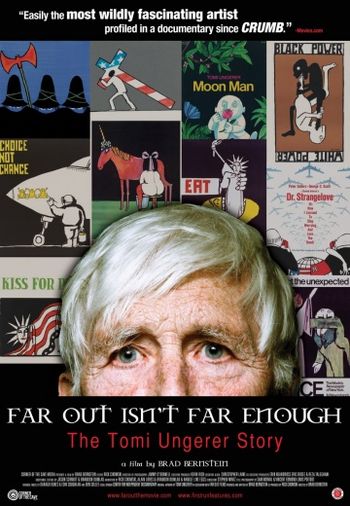 “Far Out Isn’t Far Enough” is everything a good documentary should be. Captivating, informative, shocking, and entertaining, Brad Bernstein’s dynamic exposé traces the lifelong struggles of multi-disciplined artist Tomi Ungerer — a man brimming with so much charisma, you can’t help but fall under his spell.

At one time the most famous children’s book author in America, Ungerer’s twisting path — from a child growing up in Nazi-occupied Alsace, France to becoming an enormously successful illustrator, political cartoonist, and author in ‘50s and ‘60s New York — Ungerer’s remarkable artistic output in so many fields practically ensured his eventual exile from America.

Few artists have so fiercely and eloquently tilled the soil in the “no-man’s land between good and bad” as Tomi Ungerer. Here is a bold cinematic portrait of one of the most honest and talented artists you could ever hope to meet.