« MUCH ADO ABOUT NOTHING | Main | SHAFT — CLASSIC FILM PICK »

THIS IS THE END 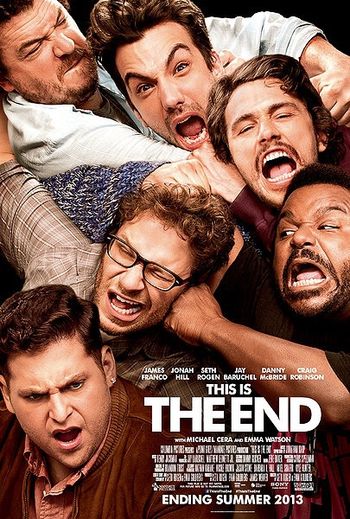 Not Quite Apatow
Rogen, Franco, Hill, and McBride Joke Around

“This Is the End” exposes the narrow limits of the self-referential humor favored by Generation Z comics James Franco, Jonah Hill, Seth Rogen, Jay Baruchel, Danny McBride, and Craig Robinson. As funny as they are, these are probably not the guys you want to squander your last few hours of earthly existence hanging out with. The movie starts out hot with laughs but steadily loses steam toward a truncated climax that strains the film’s already overlong running time. The end doesn’t come soon enough.

As foreshadowed by its apocalyptic title, the goofball narrative involves a bible-thumping Rapture complete with gigantic fire-and-brimstone demon beasts destroying everything on the planet, or at least in Los Angeles. If that happens to include a dangling demon dong of terror that must be castrated by a heaven-transporting beam of blue light, then so much the weirder.

Fresh off a plane from Canada, Jay Baruchel (“Tropic Thunder”) happily reunites with his welcoming actor pal Seth Rogen. Seth is only too pleased to supply a candy-store’s worth of weed, booze and video games in order to make Jay feel welcomed at Seth’s newly purchased L.A. pad. In spite of Jay’s lack of enthusiasm at the prospect of spending time with Jonah Hill — an actor Jay “hates” — Seth convinces his needy buddy to come along to a swinging party at James Franco’s bunker-styled mansion in the Hollywood Hills. 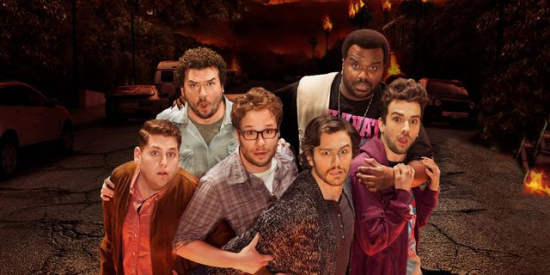 While L.A. and ostensibly the rest of the world succumbs to the Rapture, Franco and his handful of buddies take shelter inside. Craig Robinson wears a t-shirt that commands, “Take yo panties off.” The non-sequitur joke resounds from the panicked group of man-boys faced with conserving a limited amount of food and water that Danny McBride flagrantly squanders at every opportunity. Jonah Hill becomes possessed by a demon, leading the filmmakers to create a kind of movie-within-a-movie entitled “The Exorcism of Johan Hill.” The effect is closer to a Saturday Night Live skit than something worthy of a feature film. 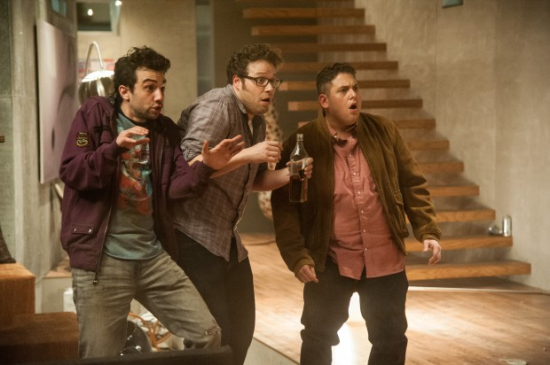 “This Is the End” is a stunt-comedy filled with trashy throwaway comic bits created by unsophisticated minds. It’s a shotgun approach that works well enough to induce more laughs than you’d get from a typical Hollywood comedy. Still, the humor never approaches the Judd Apatow wheelhouse of comedy that many of this film’s actors have shared in — see “The 40-Year-Old Virgin” or “Pineapple Express.” Our desperately troubled world could probably use more stoner movies like “This Is the End” even if it does wear out its welcome long before it’s over.