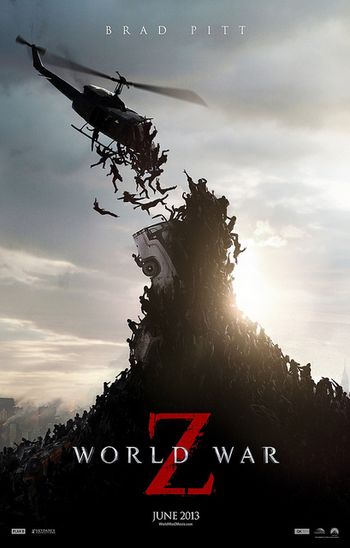 It says something [negative] about modern filmmakers that only a few are able to harness the potential of the zombie genre. Simon Pegg and Edgar Wright struck comic gold with their inventive addition, “Shaun of the Dead.” What a fun ride that movie is. Zack Snyder (“Man of Steel”) hit the right notes with the Geprge A. Romero co-written update of “Dawn of the Dead” in 2004.

However, “World War Z” a stillborn effort that never rises from the dead. Set up as nothing more than a prolonged chased movie with a few twists of CGI spectacle thrown in to account for the film’s exorbitant budget, the story has little to say about global consumer culture [an easy target if ever there was], or the potential for a widespread corporate-driven poising of the population, or any other of a hundred au currant premises you could come up with. The movie doesn’t even bother relishing in the intrinsic Grand Guignol aspects of brain & intestine-eating activities that zombies are known — and loved — for.

What you get is Brad Pitt — and as everyone knows, he really quite good. Except, he’s the wrong actor to have saving the world from zombies because everything is too easy for him. When his United Nations agent Gerry gets impaled through the belly with a piece of metal, it barely slows him down for a minute. Suspension of disbelief is a problem. The last time I got impaled with a long piece of metal shrapnel, I was in the hospital for weeks.

Without giving what little there is of a story away, the movie has one of the least satisfying and muddy endings you’ve ever seen. Gerry makes a decision that will most certainly kill him over time, and all others who follow in his footsteps, but the filmmakers don’t bother disclosing why the ploy is acceptable.

A bevy of screenwriters pitched in to create a zombie picture that has more in common with “Man of Steel” than it does with “Dawn of the Dead.” That is a problem — a big problem. As the throng of apocalypse of movies continues to roll out as a weird guessing-game-prelude to the real thing happening, you have to ask yourself how much better the $125 million+ budget for "World War Z" could have been spent on improving infrastructure anywhere on Earth.

Listed below are links to weblogs that reference World War Z: