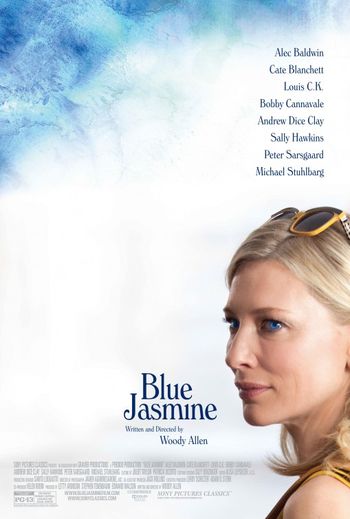 Woody Allen has bottomed out. His latest attempt at interpreting yet another global mecca — this time San Francisco — through a prism of flailing romance, barely manages to elicit a couple of subdued chuckles. Allen’s busy attempt to add more serious drama than humor on his romantic comedy scales is a depressing affair all around.

The ever-impressive Cate Blanchet plays the title character, a textbook white-woman-of-entitlement struggling to recapture her social status after a sudden fall from affluent grace in New York City. Her adulterous con artist ex-husband Hal (Alec Baldwin) gets the blame, but it takes two to tango. A nervous breakdown has turned Jasmine into a pill-popping ball of anxiety. Hers is the epic mid-life crisis of a woman who has never worked a day in her life. Blanchet’s thin-skinned performance is so convincing it hurts to watch. Too bad “Blue Jasmine” isn’t worthy of her estimable efforts. An Oscar nomination may yet be in the offing.

Allen’s signature fragmented storyline [reference “Annie Hall”] switches between splintered flashbacks of Jasmine’s recent past of marital restlessness in New York, and her current efforts to reinvent herself with the assistance of her similarly adopted “sister” Ginger (Sally Hawkins) in San Francisco. Jasmine has burned Ginger many times in the past but Ginger still respects their relationship despite Jasmine’s outspoken disdain for everything about Ginger and her lifestyle. Jasmine takes on a day job as a dentist’s receptionist while studying basic computer skills in preparation for an online course in interior design. Judgmental as the day is long, Jasmine can’t stand Ginger’s blue-collar boyfriend Chili (Bobby Cannavale). Forget that Jasmine was partly responsible for contributing to breaking up Ginger’s former marriage by encouraging the couple to invest their recent windfall with Hal to manage the money at a promised 20% return. Windfall gone.

“Blue Jasmine” is Woody Allen’s sidelong, belated attempt to address fallout symptoms of America’s economic collapse. Tonally, the movie has a sleepwalking quality to it. Characters bump into things and people, but the effect is rarely funny or even sympathetic. The financially bankrupt Jasmine can still charm a wealthy potential love interest into a marriage, but the skeletons in her closet keep popping out at the worst possible moment. The same could be said for Woody Allen.

Where there was once flesh and blood in his movies, now there are merely broken pieces of murky inspiration that don’t add up. Allen’s once-magical gift for connecting resonant story fragments now leaves sprinkled shards of visually appealing scenes that repeatedly drop off into an abyss of predictable gravity. Even Louis C.K.’s glorified cameo as Al, a potential love interest for Ginger, comes off as a disappointment. Andrew Dice Clay fares a little better as Ginger’s ex-husband Augie, but even he can’t help ground the movie. Bobby Cannavale’s character is a bull-in-a-china-shop who steals the movie through his sheer force of masculine will.

Regardless of his career-high box office success with “Midnight in Paris,” Woody Allen hasn’t made a movie as good as “Match Point” since 2005. His effort to build a more dramatically substantial comedy on his kneejerk time-flipping format backfires because the jokes simply aren’t funny. Woody Allen doesn’t know when to quit. That’s not a good thing.