REBEL WITHOUT A CAUSE — CLASSIC FILM PICK 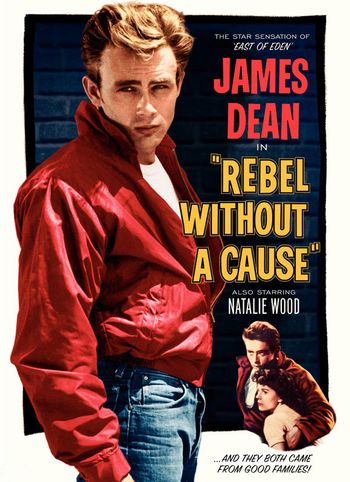 “Rebel Without a Cause” (1955) is a pivotal film for many reasons — each as important as the next. The second of just three features that James Dean appeared in — “East of Eden” (1955) came before and “Giant” (1956) followed — “Rebel” unintentionally propagated the “juvenile delinquent” culture it sought to satirize. By the time someone properly christened it “Rebel Without a Clue,” decades had passed.

The movie was based on psychologist Robert Lindner’s Freudian-themed 1944 book “Rebel Without a Cause: The Hypnoanalysis of a Criminal Psychopath.” Director Nicholas Ray (“Johnny Guitar”) took advantage of Stewart Stern’s script version of an adaptation by Irving Shulman in order to subvert Lindner’s thesis-based narrative into an exploitation B-movie complete with a fantasy version of American “teenage” culture — something that had never before been so dynamically fetishized on the big screen.

The film set off a firestorm of copycat behavior from entitled (read: "white") children of the ‘50s, who could easily afford to take liberties with the blank attitudes of the film’s young characters. Blue jeans, t-shirts, and hot-rod cars became status symbols in the age of post-McCarthy blowback.

The story applies dime-store psychology to Jim (James Dean), a parents-abusing sociopath with a winning smile, Judy (Natalie Wood), a remorseful 16-year-old tart whose father can’t stand his daughter’s blossoming sexuality, and Plato (Sal Mineo), a non-white gay kid searching for a substitute family, if not a male repository for his over-flowing affections. Plato’s subplot reaffirms Hollywood’s chronic premise that gay characters must be punished.

A group of high school bullies and their cheerleader girlfriends — of whom Judy is one — represent a pernicious threat to everything their parents have worked to provide, namely the societal status quo. 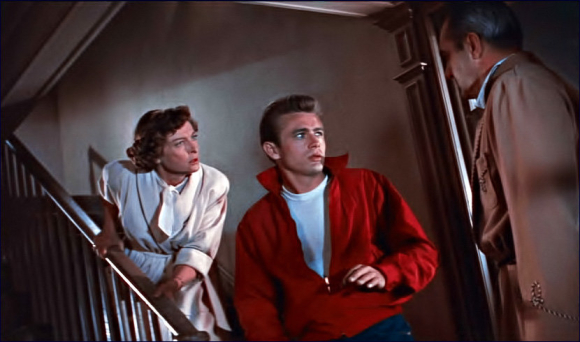 The views expressed in the movie are hardly defensible. Los Angeles high school senior Jim Stark (played by an implausible 24-year-old Dean) dresses like a model torn from the pages of Esquire. He wears loafers with a coat-and-tie that would fit in better at Oxford than in boiling Los Angeles. Jim is all torn up inside because his overbearing mother (Ann Doran) wears the pants in the family, while his hen-pecked father (Jim Backus) is so thoroughly feminized that he wears a woman’s apron to do the house cleaning. Talk about protesting too much! Jim is the worst kind of spoiled brat. His filthy-rich parents have moved repeatedly from town to town rather than directly address Jim’s confused rite of passage to become a man. Their advice is to always tell the truth, and not agonize about things that will seem comical in retrospect, as he grows older. Strong-willed women are as much of a menace to society as the jean-wearing bullies that make up the rules Jim faithfully follows.

That James Dean perished in a car accident before “Rebel Without a Cause” was released only added to the mythology surrounding the movie. Few young audiences at the time were capable of comprehending Dean’s iconic creation of character for what it was — a carefully crafted combination of method-acting techniques toward building a successful film-acting career. Strangely, Dean’s utterly inappropriate acting style gives the movie its narcissistic rudder.