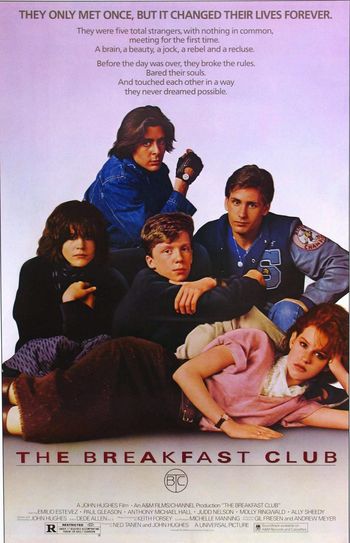 In the 1980s writer-director John Hughes reinvented the teen genre. It was a time when youth fashion congealed around peppy new wave music with a less political edge than the punk movement that preceded it. Hughes’s 1985 follow-up to his previous year’s coming-of-age girl comedy “Sixteen Candles” is a low-budget exploration of familial disenfranchisement and social alienation depicted via five high school students stuck in an all-day Saturday detention. Each character represents a teen stereotype of white-bread upbringing.

Early on a Saturday morning — “March 24, 1984” —parents drop off their budding adults at suburban Illinois’s Shermer High School where each student will spend nine hours sitting in an open-air library “pondering the error of their ways.” Their assignment is to write a thousand-word essay describing who they think they are. Their unified literary response bookends the story. 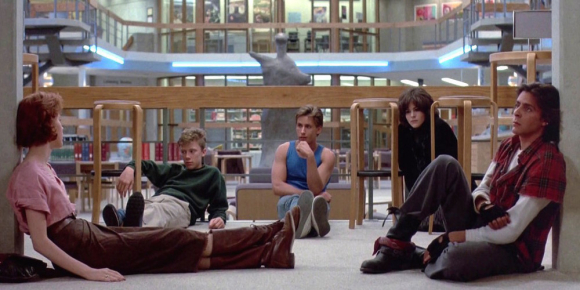 Emilio Estevez plays Andrew, a jock from the school’s wrestling team whose father treats him like a “racehorse” bred for competition. Brian (Anthony Michael Hall) is a geeky class nerd whose love of math he displays with the watch-calculator he wears on his wrist. Ally Sheedy is an introverted goth who eats sugar on white bread and hides behind her perennially mussed hair. Prom queen Claire (Molly Ringwald) wears diamond earrings and brags about her immense popularity. Judd Nelson’s agent provocateur John Bender holds court over the social cross-section with a bitter cynicism born of the brutal treatment he receives at home from his abusive father. Each performance is impeccably true to form. We recognize and identify with all of them.

A quote from David Bowie’s “Changes” sets the thematic tone in the pre-roll.

“…And these children
that you spit on
as they try to change their worlds
are immune to your consultations.
They’re quite aware
of what they’re going through…"

Hughes’s keen ear for the way teenagers of the era talked is spot-on. He also understands how teens earn trust, deflect and invite confrontation with one another, and give away their weaknesses. We see how that dynamic changes when they confront or conform to authority figures, such as faculty administrator Richard Vernon (Paul Gleeson) whose attempts at intimidation don’t go over well. 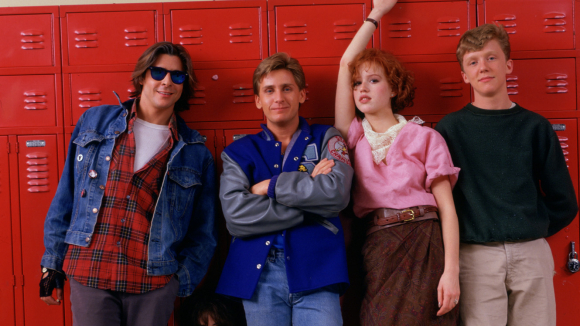 Minimalist in its nature, “The Breakfast Club” is one hundred percent character study. The primary action that takes place involves a group mission to extract pot from Bender’s locker — a mission that causes Bender to suffer a more intimate brand of detention, where Mr. Vernon displays the potentially violent depth of his contempt for the students he is entrusted to supervise, if not teach. The movie captures teenagers’ innate ability to defeat authority figures, and their own misconceptions about themselves. It’s an instructive movie written by someone who understands the limits that society puts on teens, as well as the ones they build for themselves as vital defense mechanisms. Ironically considering Hughes' Republican politics, breaking free of those binds seems not only possible but also probable. 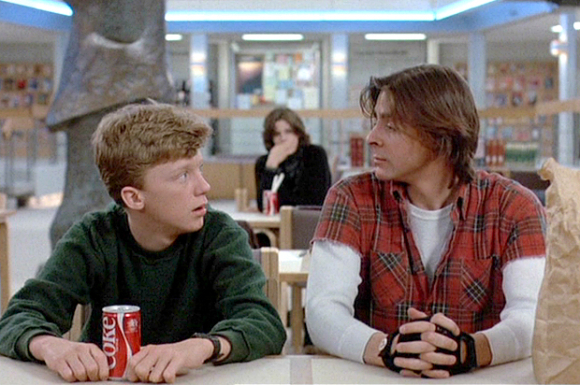