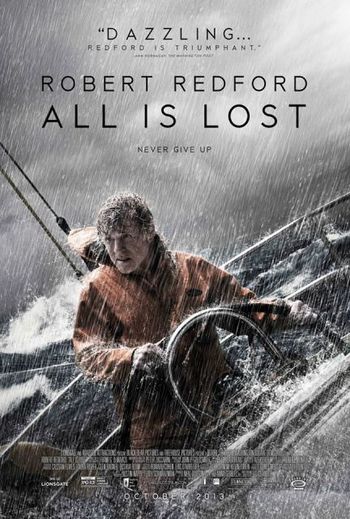 Robert Redford gives the finest performance of his career in writer-director J.C. Chandor’s literal and metaphorical tale of one man’s attempts to survive on the high seas. Redford carries Chandor’s one-man showcase with a depth of character and emotion that speaks volumes in spite of the film’s nearly complete lack of dialogue. Like a fine wine, Robert Redford’s gifts as an actor have grown into an effortless complexity that is transparent as it is rich. An Oscar nomination is surely forthcoming.

Water pours into Redford’s unnamed character’s 39-foot yacht — a “1978 Cal 39 sailboat” — waking him from his sleep. His punctured vessel — the “Virginia Jean” — is lodged on the puncturing corner of a giant red cargo bin that floats in the middle of the Indian Ocean. Children’s tennis shoes float out from the broken container — an ugly reminder of how far capitalism’s nature-dissolving effect has reached.

Decisions and repairs must be made. For the next 100 minutes our unnamed embodiment of brawny adaptability will meet every escalating challenge that nature throws at him with a stoic resolve that is fascinating and inspiring to witness.

Sharing single-person survival elements with last year’s “The Life of Pi,” and this year’s sci-fi nail-biter “Gravity,” “All is Lost” carries greater implications pertaining to the fragile state of a planet in free-fall. This is in part due to a bevvy of unanswered questions regarding our protagonist’s backstory and purpose for sailing alone in the open ocean on a boat barely fit for such a voyage. J.C. Chandor wants the audience to struggle right along with his daring protagonist. A single mistake could mean the end. 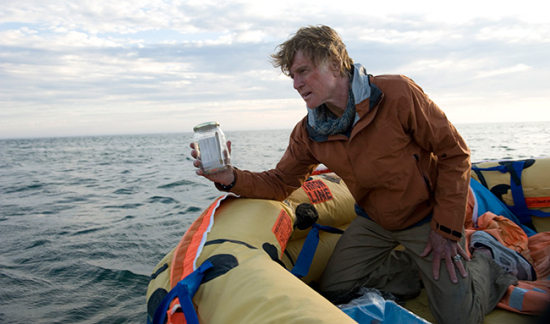 Existentialism prevails. “Our Man’s” constant struggle for existence takes on a macro-micro vision of cool-headed logic used to battle increasing odds against him. Terrible storms toss the sailboat like a child’s toy. The captain is forced to improvise and learn on the fly. Navigating his way into a shipping lane seems to offer hope for rescue. Redford’s stoic character perseveres with grace and determination in spite of the fierce conditions he faces.

Chandor’s pitch-perfect use of special effects never overshadows the nuances of Redford’s seamless performance that marks every dramatic beat as a virtuoso of his instrument. Likewise, Alex Ebert’s evocative musical score never draws attention away from the highly energized escape story at hand.

At 77 Robert Redford represents a Hollywood icon whose career of unforgettable performances stretches back farther than the eye can see. Not only does Redford do nearly all of his own stunts in the movie, he weaves narrative wool with his every gesture and facial expression. It is a pure cinematic delight to watch Robert Redford acting alone beside such an organic and dynamic backdrop as J.C. Chandor (“Margin Call”) creates. It really doesn’t get any better than this.