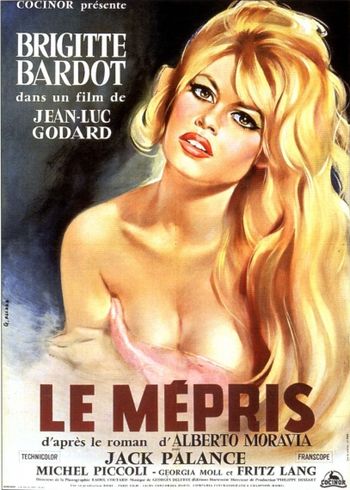 Instinctively self-reflexive, “Contempt” (“Le Mepris”) is one of Jean-Luc Goddard’s brightest achievements. Made the same year, 1963, as Federico Fellini’s “8 ½”, “Contempt” shares that film’s anxious search for artistic and poetic meaning beyond the glamour of cinema, insipid celebrity culture, and the ensemble spirit of filmmaking. Filmed in Italy and on the grounds of the famed Cinecittà studios, it breathes the same air as Fellini.

Goddard isn’t merely deconstructing cinematic narrative form; he is actively seeking a value system beyond any that has existed before. You can see the filmmaker pushing at every boundary of the frame. Loosely adapted from Alberto’s Moravia’s novel “A Ghost at Noon,” repeated lines of dialogue and reiterated quick-cut flashes of scenes demand that the audience reconsider the film’s thematic messages — of which the act of cinematic storytelling is a key component.

Although she was 29 when the film was made, the younger-looking Bardot is the naked embodiment of girlish femininity and immaturity. The tempestuous Camille baits and torments Paul to the point that he lashes out at her with slaps across her face. The extended middle section of the film takes place in a sparsely appointed but spacious apartment in Rome, which Paul has recently purchased for the couple to share. Contemporary furniture provides a flattering stage for Bardot’s mutable character to cavort between her natural blonde hair and a brunette-wigged disguise that references Goddard’s wife Anna Karina, to whom he was tethered in a rocky marriage at the time.

Camille shamelessly flirts with Jeremy Prokosch (Jack Palance), a wealthy and reckless American film producer working with Austrian director Fritz Lang (playing himself) on a film that Paul is hired to rewrite. Secure in his masculinity, Paul does not attempt to interfere with Jeremy’s overtures toward Camille — at least not at first. The film-within-the-film is an adaptation of Homer’s “Odyssey,” complete with rotating shots of Greek-god-statues that revel in a camp visual style.

Goddard toys with dramatic conventions. A gun introduced in the second act [not in the traditional first act] fails to go off in the third. The mundane tortures of sustained romantic commitment flicker in a movie that observes the ambivalence of physical beauty, corrupt artistic intentions, and the cultural effects of American self-indulgence. Camille comes to “despise” Paul for no particular reason other than the fact that he isn’t as crass as his rich American rival. As in any relationship, contempt leaves a permanent residue amid its tragic consequences.