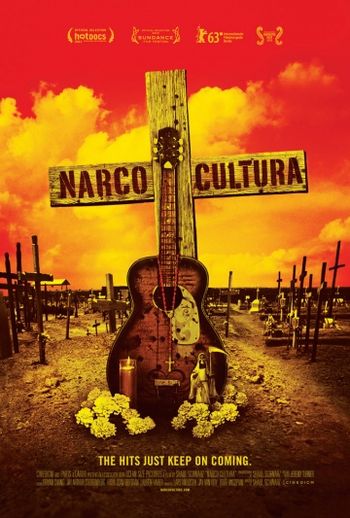 If you think Afghanistan is a dangerous place, it’s got nothing on Juarez, Mexico. More than 60,000 murders have occurred since 2006 when drug cartels began an open policy of all-out war against one another, and against government and police forces. Many of these brutal killings — which frequently involve decapitation and dismemberment — occur in and around Ciudad Juarez, Mexico. The region’s economy feeds almost exclusively on the drug trade, thereby fuelling a popular musical philosophy known as “Narco Cultura” which celebrates the lifestyle of Mexican drug lords and drug-traffickers.

War-photographer-turned-documentarian Shaul Schwarz focuses on the personal paths of a narcocorrido (drug ballad) songwriter/bandleader living in the relative safety of Los Angeles, and a Juarez crime scene investigator.

Edgar Quintero is a twentysomething family man who is well paid by drug lords for writing tailor-made narcocorridos about their exploits and Narco-luxury lifestyles. Quintero is inordinately fascinated with the violence and corruption that is tearing Mexico apart from the inside out. He’s a cheerleader for the Devil.

The innocuous-sounding Movimiento Alterado music that Quintero sings sounds deceptively happy harmonically, but its repugnant lyrics revel in greed, types of guns, ruthless killing, and an outlaw attitude that is implicitly inarticulate. In spite of being banned from Mexican television and radio-play, the illegal music is thriving on both sides of the Mexican border. Quintero fancies himself a badass outlaw on par with the criminals he writes about. He dreams of taking a six-month vacation to Mexico to immerse himself in Narco Cultura so he can better write and sing about it. He’s very into the “vocabulary” of Narco culture.

Richi Soto is a crime-scene investigator in his hometown of Juarez. Soto has seen many of his coworkers murdered by drug lords, but carries on with his distasteful job in spite of constantly having to look over his shoulder while contending with the most horrible homicides imaginable. Forget that little to none of the evidence Soto collects will ever be used. The police system is just as corrupt as the criminals it pretends to pursue. Richi Soto needs the paycheck.

“Narco Cultura” is especially depressing for the way it reflects on America’s mirror culture of violence and of its celebration in Hip Hop music. Shaul Schwarz’s cinema vérité style pulls no punches. There is much to be taken away from this disturbing documentary. Nightmares may follow.