Anyone holding a strong opinion about Lance Armstrong’s dramatic rise to the top of competitive cycling and sour fall from grace should see Alex Gibney’s from-the-horse’s-mouth documentary. Profiting from the fact that Gibney started work on the film in 2008 — at the time of Armstrong’s post-retirement return to the Tour de France — the documentary captures crucial incidents that had far-reaching implications for Armstrong and for competitive cycling. Gibney’s close relationship with Lance Armstrong during and after the doping scandal allows for a deep level of personal investment on both sides. The film’s nucleus derives from straightforward face-to-face interviews between Gibney and Armstrong.

A more than adequate telling of Armstrong’s inspiring early story as the only child of a broken family who became a cycling phemon before being struck with testicular cancer, leads into his unprecedented seven consecutive Tour de France wins — from 1999 to 2005. Gibney leaves nothing out. Armstrong’s contrite interview with Oprah Winfrey sets the tone of honesty that the disgraced cyclist uses in spelling out details of his decisions over the course of his career. Italian sports doctor Michele Ferrari’s participation in doping cyclists such as Armstrong and others becomes a primary focal point. 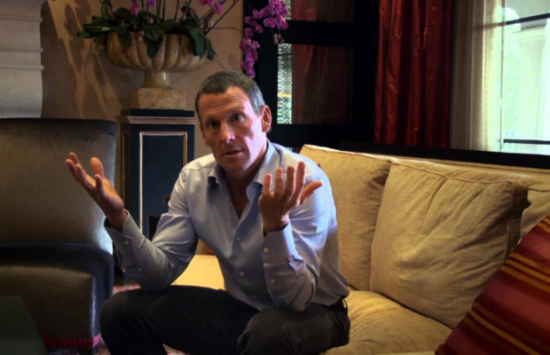 Anyone who has seen Chris Bell’s powerful 2008 documentary “Bigger Stronger Faster*” knows where the story is headed. There isn’t a pro sport on the planet that didn’t advance through the use of anabolic steroids for an extended period of time. Cycling is no exception. There’s no question that Lance Armstrong’s hubris caused him to mistreat teammates, journalists, and everyone around him. There’s also no question that he wasn’t engaged in a drugging practice that every one of his competitors also took advantage of. There is no happy ending, or easy conclusion, to this story.