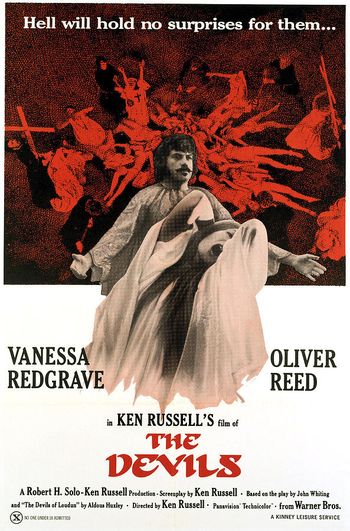 Few audiences have seen Ken Russell’s highly stylized depiction of the 17th-century destruction of the autonomous fortressed city of Loudun at the hands of Cardinal Richelieu and his witch-hunting assistants. Even fewer audiences have watched Russell’s unedited 117-minute version. This is due to a furor stirred up by the Catholic Church, which urged the studio to chop up the film before its release — with the assistance of the then-Catholic Russell himself. British and American censors made further cuts, which generated various attenuated versions of Ken Russell’s masterpiece of historically fueled religious and political invective. Even the version I screened was missing eight minutes from the original — so much for being a completest.

Russell’s audacious script — based on John Whiting’s 1960 play “The Devils” and on Aldous Huxley’s book “The Devils of Loudun” — is about “the self-destruction of a citadel from within.” King Louis XIII reigns over France. He tacitly honors an agreement he made with the recently deceased Governor of Loudun not to invade the walled city, now overseen by Urbain Grandier (lustfully played by Oliver Reed). Nevertheless, Louis’s troops have been toppling similar such fortified towns across France with the excuse of preventing a Protestant uprising as a useful political foothold for the monarch's ambitions to consolidate power. Father Grandier is viewed as something of a rock star among the local order of Ursuline nuns thanks, in part, to his unguarded reputation as a sexually voracious womanizer. Reed’s Grandier is a larger-than-life figure of sensual magnetism. However, just as Grandier discovers true love in the arms of Madeline (Gemma Jones) — a woman he marries in a private ceremony — Sister Jeanne des Agnes (Vanessa Redgrave), the hunchback head of the town’s convent, requests Grandier to become confessor the convent in the hopes of being penetrated by Grandier’s holy rod. He declines. Sister Jeanne’s idolizing of Grandier involves an all-encompassing sexual preoccupation that turns into the fierce rejection of a [imagined] lover scorned. Sister Jeanne and her flock present a perfect Achilles heel for military taskmaster Baron Jean de Laubardemont to exploit as possessed victims of Satan, in order to infiltrate and take over the city. Laubardemont chomps at the bit, wanting nothing more than to demolish the city’s protective walls.

Derek Jarman’s visceral production design is the outrageous work of a mad genius. The entire city of Loudun is made up of sharp white bricks with black mortar. The bold visual effect is chilling. An element of horror infects everything onscreen. Redgrave’s staggering performance as Sister Jeanne prefigures Regan’s demonically possessed character in William Friedkin’s “The Exorcist.” There’s no question that Friedkin drew on “The Devils” for inspiration. Witness Jeanne’s contorted neck-and back-bending performance during her exorcism at the hands of the debauched inquisitor Father Pierre Barre (Michael Gothard).

Not even a clever ploy by a disguised King Louis himself — revealing that Father Pierre’s exorcisms are pure fiction — can prevent Laubardemont and his men from putting Father Grandier on trial before a kangaroo court. Russell’s nudity filled political statement regarding mass “corruption and brainwashing by Church, State, and commerce” caused him to abandon his Catholic faith. “The Devils’ remains a terrifying reminder of the ruthless tactics used by similar forces to marginalize and manipulate populations the world over.