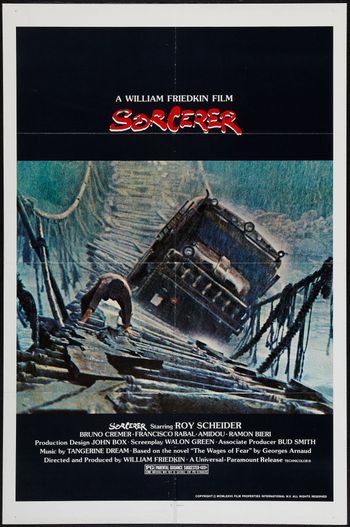 William Friedkin leveraged the influence he accrued with the enormous box office successes of "The French Connection" and "The Exorcist" — both films also won Oscars — to live out his dream of remaking Henri-Georges Clouzot's groundbreaking 1955 thriller "Le Salaire de la Peur" ("Wages of Fear"), albeit with a sharper socio-political-corporate commentary and an even tougher visual style. The director’s decision to use an outré electronic music score by Tangerine Dream adds considerably to creating a volatile vibe that complements screenwriter Walon Green's perceptive adaptation of Georges Arnaud's anti-capitalist 1950 novel.

During its finely crafted first act, Friedkin masterfully sets up the back-stories of four criminals from around the globe who end up in the same backwater town in Venezuela where an oil well fire burns out of control some 200 miles away. The manmade disaster gives the desperate refugees an opportunity to make a sizable sum of money — if they can successfully deliver cases of nitro-sweating dynamite to the site to stanch the out-of-control blaze.

Despite Friedkin's public grousing about Roy Scheider being the “wrong actor” for the film’s leading man role of Jackie Scanlon — the director originally wanted to cast Steve McQueen — the reliably dedicated Scheider delivers a gutsy performance that is every bit as solid as his work on "Jaws," if not better. Indeed, Scheider is the only name actor in the film.

Infamous battles between the then ego-bloated Friedkin and the film’s production companies (Paramount and Universal) — over casting and budgetary concerns — were exacerbated by costly set disasters. One such crisis involved an expensive rope suspension bridge used in one of the film's most gripping sequences. The specially created hydraulic-controlled bridge extended over shallow riverbed in an area that never flooded — at least not until shooting was scheduled to begin. A still image from the nail-biting scene was used in the film’s extraordinary poster. It remains one of the most anxiety-inducing scenes in the history of cinema.

"Sorcerer" had the misfortune of being released at the same time as "Star Wars," and as such flopped at the box office in the blink of an eye — not that the powers that be didn’t set it up to bomb. After bleeding money during the film’s far over-budget production, Universal and Paramount wrote the picture off as a loss and put no effort into distribution or publicity. For the first time in his career William Friedkin failed as a filmmaker — not because of the superb product he delivered, but rather the way he played the system. His outsized pride caught up with him just when he thought he was above it all.

It's rare that a remake lives up to the original upon which it was based, much less exceeds it, but William Friedkin’s "Sorcerer" is that exceptional movie. It remains one of the most overlooked cinematic masterpieces of all time.