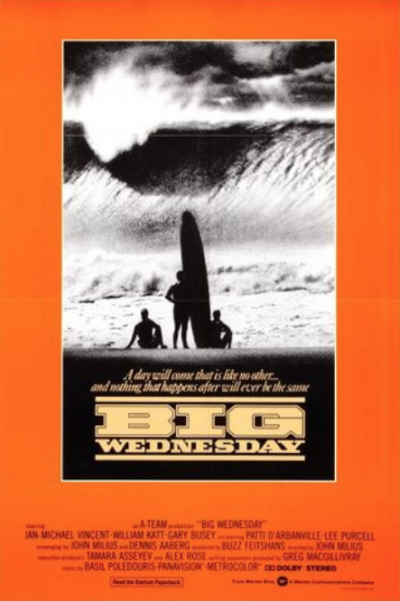 Co-writer/director John Milius (the screenwriter of “Apocalypse Now”) drew on his experience growing up as a young surfer in Malibu during America’s invasion of Vietnam, to create a generational torch-passing narrative that encapsulates the tribal nature of 60s’ and ‘70s-era surf culture in Southern California.

Drawing on threads of anecdotal, mythological, and literary influences — from Moby Dick to King Arthur — Milius focuses the narrative’s 12-year span on three surfing buddies and the patriarchal surfboard-maker who inspires and guides them toward the promised day of reckoning where their camaraderie will be tested on the ocean’s grand stage.

The film’s momentous title references the historically proven statistic that, for whatever reason of Mother Nature’s fickle preference, the biggest shore-breaking ocean swells arrive on Wednesdays.

If casting is everything, then John Milius scored a coup in putting Jan-Michael Vincent, Gary Busey, and William Katt together to play the film’s shared leads. Although both actors were 34-years-old when the film was shot, Jan-Michel Vincent (as “surfing legend” Matt Johnson— based on Malibu surf king Lance Carson) and Gary Busey (as Leroy “the Masochist” Smith), convey their characters’ transition from irresponsible roustabouts to men of substance with believable portrayals. For his part as the oldest-acting member of the trio, the 29-year-old William Katt evinces an easy-going charisma that shifts into steely stoicism after his character Jack Barlowe returns from serving three years in Vietnam. 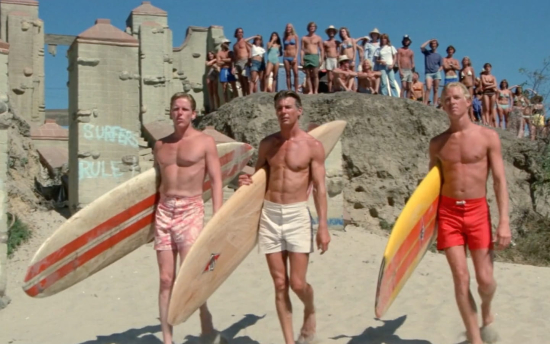 For as much time as it spends in the water, the film’s core arrives during a humorous draft-dodging sequence where Matt and Leroy go to great lengths to outsmart the goons in charge at the Selective Service office. Matt’s “surfer knot” below his knee makes his gimp act believable. Gary Busey’s partially improvised put-on as a victim of mental illness, expresses Leroy’s vehement opposition to war. 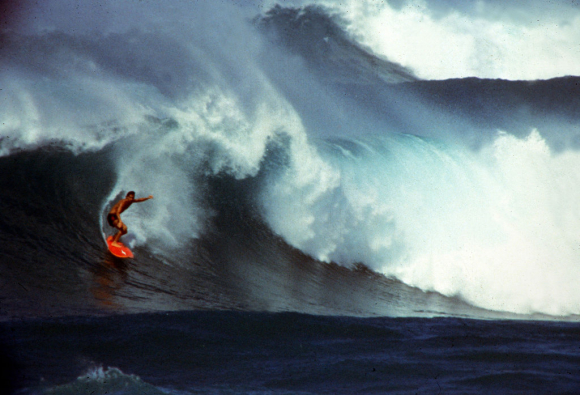 The movie is broken into four chapters (“The South Swell Summer 1962” – “The West Swell Fall 1965” – “The North Swell Winter 1968” – “The Great Swell Spring 1974”) that serve as guideposts leading the audience to the climatic moment when the title graphic “Big Wednesday” sweeps across the screen as a bold presentational announcement. 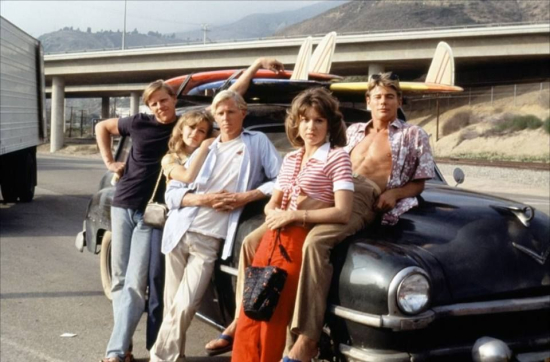 Milius constantly revisits the ocean’s churning surf as a literal and metaphoric yardstick to underscore the movie’s themes of personal responsibility, loyalty, and the pressures of unpredictable social change. The maverick filmmaker revels in lively surfing sequences to convey the athleticism of the activity as it applies to the skills of the period. Masterful photography from an assortment of camera-mounted resources gives meaning to surfing idioms such as “go-behinds,” “cut-backs,” “shooting the tube,” and the now-outdated practice of “walking the nose.” It didn’t hurt the film’s sense of authenticity that Vincent, Busey, and Katt honed their surfing skills well enough to perform a respectable amount of the surfing on display. However, a group of world-class surfers including Jay Riddle and Ian Cairns performed the dangerous stuff.

If the filmmaker lurches into sentimentality during brief voice-over philosophizing about God and where the wind comes from, it’s a forgivable affectation that honors a personal belief-system authentic to the surf culture of the era.

As Bear (Sam Melville) the surfboard-maker says, “No one surfs forever.”