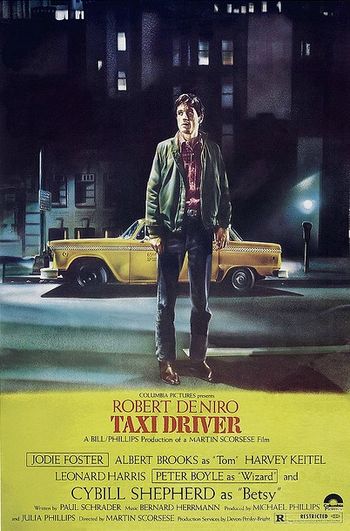 So much of American popular culture, and modern Cinema’s urban aesthetic, owes a debt to Martin Scorsese’s groundbreaking fourth feature film that it is impossible to imagine a world without “Taxi Driver.” From Bernard Herrmann’s haunting score to Robert DeNiro’s unpredictable anti-hero character, everything about “Taxi Driver” was innovative.

A 26-year-old Paul Schrader famously wrote the audacious screenplay for the film in less than a month after a period of living in his car in Los Angeles, when his love and professional lives had fallen apart. Schrader has described the script as a piece of “juvenilia.” Which works fine. Indeed, the seething narrative carries a quality of introspective desperation that seeps from the pores of a young testosterone-overloaded male who sees trouble in every direction he turns.

Constructed in the popular vigilante mode of ‘70s-era American Cinema, the gritty story follows a deeply conflicted ex-Marine-turned-hack who is all too suggestible to Manhattan’s rampant culture of crime, violence, pornography, prostitution, and drugs. Robert De Niro’s repressed, racist war-veteran character Travis Bickle gets off on the disgust he feels for the pimps and drug dealers who clutter and defile every inch of 1976 Manhattan. Latent homosexual leanings lurk at the edges of Travis’s actions around women. Here is an avenging angel who wants to defile the Madonna and liberate the whore.

Travis fantasizes about “a real rain” that “will come and wash all the scum off the streets” during his bouts of chronic insomnia, which allow him to work insanely long shifts for days, and even weeks at a time. Although there was no “post-traumatic-stress-disorder” diagnosis when the film was made, Travis Bickle clearly has what was then called "shell shock."

Scorsese introduced the world to the underbelly of mid-‘70s Manhattan at a time when economic collapse and garbage strikes left the city covered in trash. This reality shocked audiences unfamiliar with New York’s distressed state. In actuality, New York’s violent atmosphere of crime and degradation was even worse than Scorsese’s version. For New Yorkers at the time, every journey outside their tiny apartments offered a constant threat of confrontation, mugging, or worse.

The film’s political commentary hides in plain sight. Travis is a right-wing reactionary intent on assassinating a Democratic Senator running for President. Travis accepts his fate as a suicide mission. Travis trains obsessively for the assassination, working out in his small Hell’s Kitchen apartment and constructing a mechanism that will slide a pistol into his hand. He tests his tolerance for pain by holding his arm over an open flame. Practicing his moves in front of a mirror boosts his confidence. The movie embeds the viewer so deeply inside Travis’s conscious and subconscious mind that we can’t help empathize with him, regardless of how messed up he is. Here lies the genius of the film. Objectively, Travis has good qualities too. He also wants to rescue a child prostitute named Iris (Jodie Foster), though it's not his priority.

Paul Schrader addressed the confusion regarding the film’s oblique ending as a way of returning to the beginning of the film. The epilogue “could be spliced to the first frame, and the movie could start all over again.”

Listed below are links to weblogs that reference TAXI DRIVER — CLASSIC FILM PICK: