THE GRADUATE — THE CRITERION COLLECTION 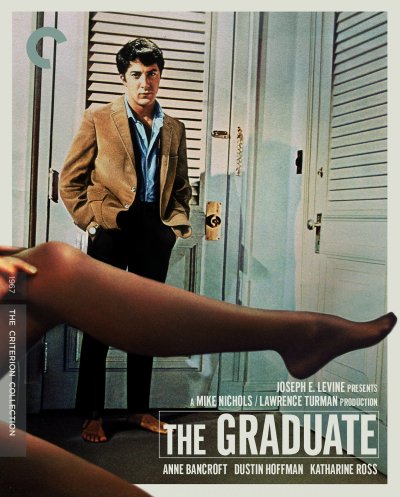 Explicitly, Mike Nichols’s “The Graduate” is an unconventional coming of age satire made all the more memorable by way of its Simon and Garfunkel-heavy score. “Hello darkness my old friend, I’ve come to talk with you again” lends a harmonically pleasing but emotionally tense atmosphere to Benjamin Braddock’s return to Los Angeles after graduating from a Northeastern college. Never before had a filmmaker used songs in such an exaggeratedly editorial manner for a movie that wasn’t a musical.

Dustin Hoffman’s Ben stands in profile on an LAX people mover, allowing the audience to consider his fresh haircut, everyman suit, and Jewish nose. Ben’s former status as a track-team “star” and class valedictorian has already lost its shine. He worries about his future, one that he wants to be “different.”

The otherness that Ben feels points to the film’s most overlooked and under-appreciated aspect; Ben is a Jew passing as an all-American WASP at a time in America when discrimination against Jews was prevalent. The ennui that Ben lives with will not go away, but he will successfully embed himself inside the heart of the white man’s castle before the film is over.

At home with his (almost certainly) adoptive blue-eyed parents, Ben is awkward in the presence of “so many devoted friends” during his welcome-home party. One of the predominately blonde party guests refers to Ben’s graduation present — a brand new Alfa Romero Spider — as a “little red wop job.” A seething atmosphere of thinly-veiled racism prevails.

Mike Nichols — himself Jewish, as were the film’s screenwriters Buck Henry and Calder Willingham — drops other clues too. Ben holds the door for an exiting group of conventioneers at the Taft Hotel, where he carries on an adulterous affair with Mrs. Robinson (Anne Bancroft), wife to Ben’s father’s law partner. Nearly all are blonde or white-haired people who could be surviving members of the Nazi Party. The Jewish Ben holding the door for a small army of WASPs at a California hotel represents a wide-reaching metaphor regarding the way Jews were treated outside of New York in 1967. How critics and audiences neglected the film’s most glaring subtext is a testament to the period's widespread lack of empathy with the Jewish condition.

With his slouching shoulders and nebbishy demeanor Ben is forced to give away his deceit when he attempts to crash another party full of WASPs. The hosts proudly announce themselves as DeWitt (a name of German heritage). All but one of the hosts reacts to Ben with utter disdain.

There’s no lack of irony in the way Mrs. Robinson seduces Ben inside her palatial home by inviting him to come upstairs for a look at her daughter Elaine’s portrait. It sets up Ben’s eventual appropriation of Elaine (Katherine Ross) at the altar of her marriage to her clearly goy fiancé Carl Smith seconds after the wedding has been sealed. Ben succeeds in carrying on with a pretense that coincidentally mirrored that of Dustin Hoffman’s denial of his own Jewishness at the time. It proved to be Hoffman’s breakthrough performance.

Posted by Cole Smithey at 11:42:06 AM in Classic Cinema, Criterion Collection