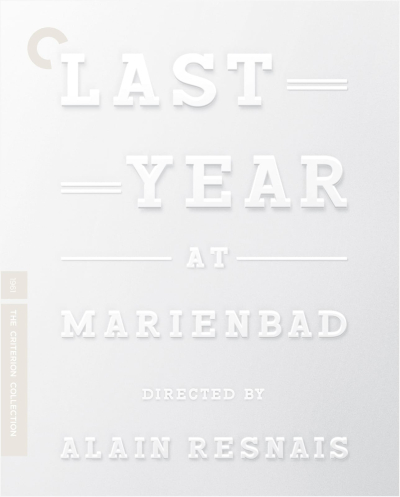 Tuxedoed and evening-gowned partygoers interact in a grand ornate international hotel that is astonishingly lavish.

Chandeliered hallways stretch for as far as the eye can see. Marble interiors with high gilded ceilings and mirror-covered walls overlook a vast formal garden punctuated by geometric topiary designs that add to the film’s glacial allure.

Resnais used the palace of Nymphenburg and the park at Schleissheim, to create a landscape that would well represent a European version of heaven on earth. Past, present, and future exist at once.

Composition and style are as important to “Last Year at Marienbad” as the eerie displacement of its veiled narrative regarding a love triangle — as played out in an otherworldly palace.

Resnais hypnotizes his audience with a repeated phrase from an unseen narrator: “Silent rooms where the sound of footsteps is absorbed by carpets so heavy, so thick, that all sound escapes the ear.”

The audience is placed in a cultural and generational vacuum where all human emotion and expression is tempered. Social interactions confirm to strict codes of behavior. No one eats. Everyone poses. Every move and gesture is choreographed so that an ever-present state of stillness serves as a black-and-white textured background.

Well-dressed bodies put on airs that pass for responsible social behavior. However, the rules are slackened during gambling games between male rivals when an atmosphere of competitive one-upmanship takes over.

Among Resnais’s austere humanoids is a young brunette beauty known simply as A (Delphine Seyrig). X (Giorgio Albertazzi) is the closest thing the audience has to a protagonist. He’s a desperate romantic motor of energy. Although A remembers nothing of it, X tries to convince her that they had a passionate love affair last year.

“I’ve never been in any bedroom with you,” A insists. He maintains that they are reuniting to fulfill her promise to make love to him and abandon her ostensible husband M (Sacha Pitoëff), a con man gambler who never loses.

Resnais uses dynamic quick-cuts between dark and bright stagnate imagery. “An object… a gesture… a décor…” reads the film’s tagline. Resnais creates a romantic synergy with these few ideas kept firmly in the viewers’ mind. Like the gambling game that M uses to take the money of all comers, the movie is built on a complex formula. M’s game involves laying out five rows of objects such as matchsticks. Each player can remove as many matchsticks as he wants from one row at a time. The object is to not be left with a matchstick. The contest speaks to the game that Resnais is playing with his audience. There is no way for the audience to win, but you can enjoy attempting to solve the riddle.