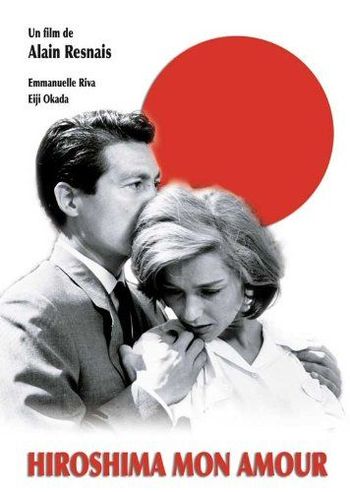 During its extended opening sequence the post-coital lovers lie together in bed. Resnais films the lovers’ nude bodies as if they are made of stone, or covered in ash.

The pair discuss Hiroshima’s recent history of devastation under America’s August 6, 1945 atomic bomb attack that wiped out most of the city and left survivors with strips of flesh, and handfuls of hair, falling from their newly toxic bodies.

Newsreel footage shows stark images from the awful aftermath of the carnage as documentary proof of the malicious attack against innocent civilians. Elle describes what she saw at a museum dedicated to the bombing. Repeatedly, Lui reminds Elle that she “knows nothing” about Hiroshima. His constant refrain reminds the audience that we too, comprehend none of the actual horrors inflicted on the residents of Hiroshima regardless of how much we imagine about the nightmare reality.

Authored by the prolific French Indochina-born writer Marguerite Duras, the historically, politically, and romantically charged narrative takes place over the course of a single day and a night.

Elle carries psychological baggage from her wartime experiences living in her hometown of Nevers, in the Bourgogne region of central France. Having been married to a German officer, Elle was attacked by her French neighbors after they assassinated her husband. Like other women who fraternized with German military men, Elle was considered a collaborator and a slut in the eyes of French society. Locals held her down and shaved her head before imprisoning her in a dungeon prison under the accusation that she was insane.

Elle can never return to her hometown. She is an outcast and a survivor. She is honest about her attraction toward men, and her hunger for sex that cast her as a “slut.” Here is a proto-feminist archetype unlike any that existed in cinema before.

Jean-Luc Godard famously called “Hiroshima Mon Amour,” “the first film without any cinematic references.” Godard purposefully ignored “Casablanca” as an obvious filmic touchstone since the bar where the couple meet for the last time is called “The Casablanca.”

Fierce in its condemnation of America’s racist military attacks against Hiroshima and Nagasaki that killed a quarter of a million Japanese citizens, “Hiroshima Mon Amour” bridges a gap between death and life via a doomed love affair that helps heal two emotionally damaged people from different races. Thoroughly honest, original, and modern in its format and narrative approach, “Hiroshima Mon Amour” continues to inspire filmmakers and audiences alike.