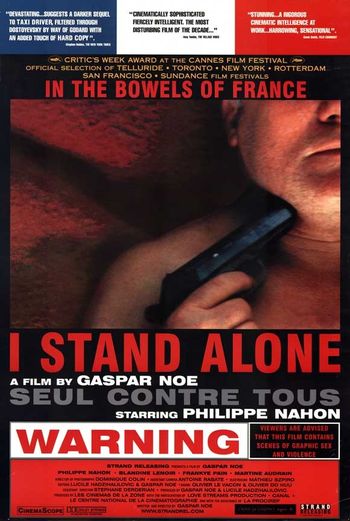 Desolation of the human soul is the provocation for Gaspar Noé’s dead-end French antihero, a nameless, broke 50-something butcher (played by the commanding Philippe Nahon). Nahon’s insidiously repulsive narcissist carries all the marks of a card-carrying right-wing extremist. Self-loathing, racist, misogynistic, and shaking with pedophiliac desires, Noé’s existential everyman of moral depravity narrates his life story. It reads like a bad acid trip.

Growing up as an abandoned child during World War II leads to the adult butcher owning his own meat shop. His mute 13-year-old daughter appears with blood on her panties. Believing his daughter was raped, he chases the suspect with a knife, but accidentally stabs an innocent man. Several years in prison leave the butcher briefly ready to “reset the counter” on his life. It doesn’t take long for that fantasy to fade. The setting is France circa 1980. Our hateful man (with the metaphoric and literal occupation title that describes him) questions his morality while wandering Paris on the run after pummeling his pregnant girlfriend, thereby killing their baby. Noé’s dual-antagonist-protagonist earns no empathy from his audience.

The Argentinian filmmaker uses simple but dynamic stylistic devices, such as a single gunshot sound effect, to emphasize sudden leaps in the butcher’s progressively offensive inner monologue of discontent and rage. Noé isn’t above using cheap gimmicks to toy with his audience, as when “ATTENTION” flashes across the screen before giving the audience “30 seconds to leave the screening of this film,” with only 20 minutes left. Rest assured any weak-kneed viewers would already have exited the cinema long before Noé’s tongue-in-cheek alert.

“I Stand Alone” (Gaspar Noé’s feature debut) is as much a philosophical denunciation of humanity as it is a thought-provoking treatise on mental illness as a socially communicable disease. The suicidal butcher’s cynical philosophy has flashes of clarity amid bouts of violent actions and bloody fantasies. Love may be the only remedy for the butcher’s nagging death wish but even that comes as a sick travesty.