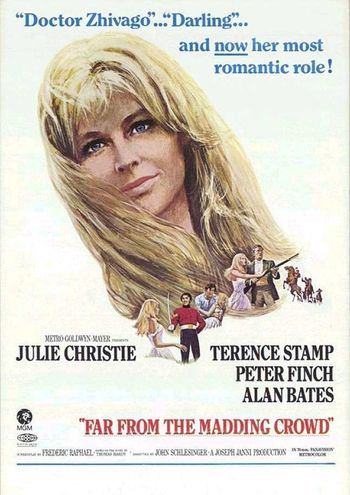 The frenzied nature of Hardy’s “madding” (means the same thing as maddening) throng refers to societal demands from which there can be no escape.

Bathsheba Everdene (Julie Christie) is a prisoner of her own beauty and of her sex. However keen Bathsheba’s sense of business acumen, which allows her farm to prosper, she is a poor judge of character. Each of her three suitors represents a specific type of Englishman whose idealized notions of wooing a woman runs the gambit from humiliating self-debasement to humble servitude to cavalier abuse.

Gabriel Oak (Alan Bates) is a practical-minded sheep farmer whose forthright marriage proposal Bathsheba rejects out of hand because she “doesn’t love him.” Soon thereafter a rogue herding-dog ruins Gabriel’s livestock plans. He is left with little choice but to work for the woman he once hoped to marry and have children with, as her farm’s supervisor.

Bathsheba is a ball of confusion. She is only capable of loving a man who can “tame” her. Such a cad appears in the guise of Terence Stamp’s Sergeant Troy, a hot-blooded soldier in love with himself. When Troy’s fiancée Fanny Robin shows up late for their wedding, because she mistakenly waited at the wrong church, he punishes her by retracting his offer of marriage. After achieving his conquest of Bathsheba, Troy promptly loses interest. Troy may be a great romp in the hay, but he has the attention span of a flea, and even less loyalty, at least when it comes to a trophy such as Bathsheba. At best he’s a showman.

If there’s one problem with the film’s casting, it’s that Terence Stamp’s unrestrained performance overpowers the film. Frederic Raphael’s script adaptation exacerbates the issue with a needless circus show subplot that sidetracks the narrative.

Bathsheba’s suitors are just as trapped in societally-imposed stereotypes as she is. Even after leaving the army, Troy carries himself as a man away on leave. He’s much happier drinking with the boys than he is tending to his wife’s needs. Peter Finch’s William Boldwood is a wealthy estate owner with his heart displayed prominently on his sleeve. Mr. Boldwood falls prey to a girlish prank which Bathsheba plays in which she sends him a valentine with the words “marry me” embossed on the outside. The literal-minded Boldwood takes the bait so hard that even after learning of its deception, he remains stuck in a fog of empty romantic hopes.

Visually lush and powerfully acted by a quartet of England’s finest actors, John Schlesinger’s “Far From the Madding Crowd” is admirable in spite of its scattered narrative focus and flaws in its direction.