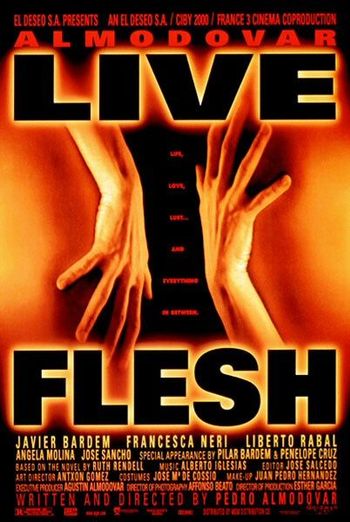 “Live Flesh” (“Carne Tremula”) is one of iconic Spanish director Pedro Almodovar’s most overlooked and underrated films. It is one of the flamboyant filmmaker’s clearest manifestations of his signature melodramatic style with a personalized homage to Spanish culture during and after Francisco Franco’s dictatorship. Distinguished by its soap-opera presentation, Almodovar makes pointed political statements that bruise. British author Ruth Rendell’s 1986 novel supplies the narrative form Almodovar transmutes to serve his goal.

A story of secretly shared bedfellows begins with the birth of a boy. Almodovar’s later muse Penelope Cruz plays a pregnant prostitute with the majestic name of Isabel Plaza Caballero. On Christmas Eve 1970, Isabel’s water breaks in the middle of the night while she rides a public bus guided by a put-upon driver who wonders aloud why he, out of 30,000 other bus drivers in Madrid, has to put up with the inconvenience of pulling over so that a rider can give birth. Isabel names her son Victor.

Spain is silenced under a state-decreed state of emergency. “Libertad Abajo El Estado de Escepcion” (Freedom under the State is the exception”) is spray-painted on a wall behind the parked bus.

Mother and son are rewarded for the public-transport birth with free lifetime bus passes. Little good it does. Twenty years later, Victor runs into a bad-luck situation with Elena (Francesca Neri), a junkie prostitute who lands him in prison for shooting David, an undercover cop played by Javier Bardem. Nevermind that David’s police partner Sancho (Jose Sancho) pulled Victor’s finger on the trigger. As we discover, Sancho knew that his partner had been sleeping with his wife Clara (Angela Molina) and made the most of a violent opportunity.

David is living as a wheelchair-bound paraplegic as a result of the shooting when Victor is released from prison six years later. Spain has changed as much as David and Victor have. Where the streets were once empty because people hid inside their homes, Madrid now bustles with crowded sidewalks. David has married Elena. They have a special basketball court inside their house where he practices for the next Summer Paralympics. The recovered Elena runs an orphanage. 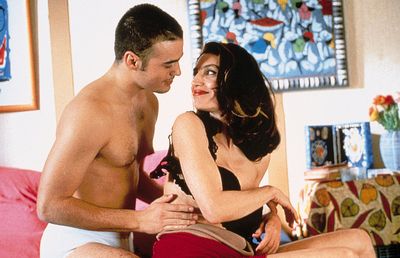 Victor finds cold comfort in his recently deceased mother’s squalid house in a desolate Madrid slum. He cherishes the inheritance she left him (150,000 pesetas – roughly $1300), imagining how many tricks she had to turn to save up this meager amount. While visiting his mother’s grave, the well-intentioned but socially inept Victor observes David and Elena attending her father’s funeral. Coincidence doubles down when Victor meets Clara, Sancho’s abused wife, at the cemetery. Almodovar uses cheeky Hitchcock-inspired framing to energize Clara’s entrance as shot though a wreath of flowers. Dressed in a leopard-pattern coat, Clara is on the make for Victor’s long-simmering romantic enthusiasm. She proves to be an ideal teacher to Victor of all things carnal. Victor’s string of erotic retribution extends to Elena, whose presence he shares daily while volunteering at her orphanage. 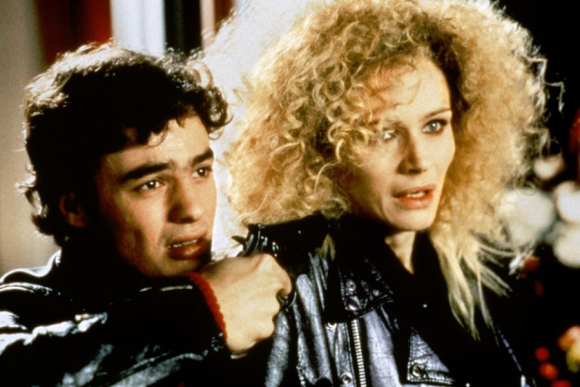