SHOCKTOBER! reaches a fever climax of terror with Tobe Hooper's THE TEXAS CHAINSAW MASSACRE for episode #76. Dramatist Phil Holt returns to the podcast to guest co-host this very special Halloween edition with the addition of Brooklyn Brewery's POST ROAD PUMPKIN ALE ! Close the curtains, light some candles and settle in for our scariest episode yet! 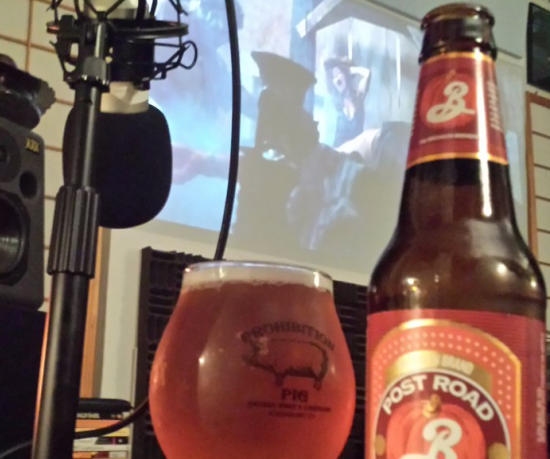 This film’s intimidating title alone was enough to keep weak-kneed audiences away from cinemas and drive-ins back in 1974 when filmmaker Tobe Hooper released what was, at the time, the most intense horror movie ever made.

In the United Kingdom, the picture was banned on principle alone.

Rumors of the film’s notorious chainsaw-wielding Leatherface character, who impales a young woman on a meat hook, a scene revealed in the movie’s promo poster, spread quickly. 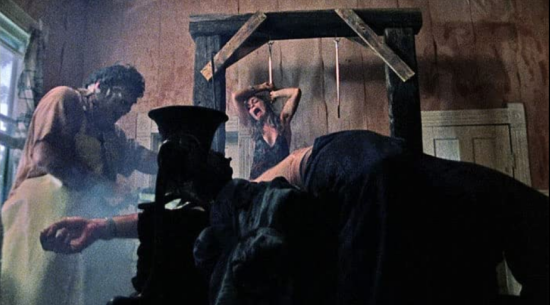 Audiences were afraid of how badly they might be scared – and they had good reason. 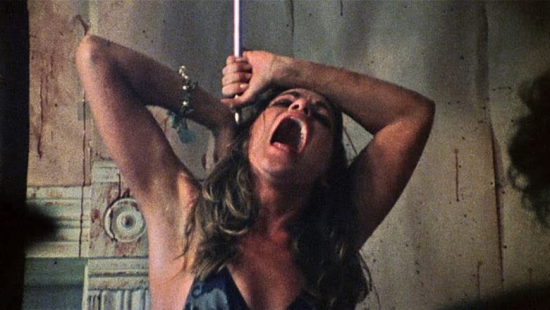 Hooper baited his film’s hook with a time-honored exploitation trope about the picture being based on a “tragedy” that “befell a group of five youths, in particular Sally Hardesty and her invalid brother, Franklin.” There are still plenty of people who believe that the murders we witness onscreen are based on real-life killings; they are not. Over a black screen we hear the sound of a shovel digging. Camera flashes reveal short visions of fresh corpses. A news broadcast tells of Texas grave robberies. The camera pans down the body of a ripe cadaver holding the head of another while propped up on a tombstone. Dry dust blows across the macabre scene. We are firmly inside an American gothic atmosphere of Grand Guignol gore. A dead bloody armadillo lies facing up on a Texas road. 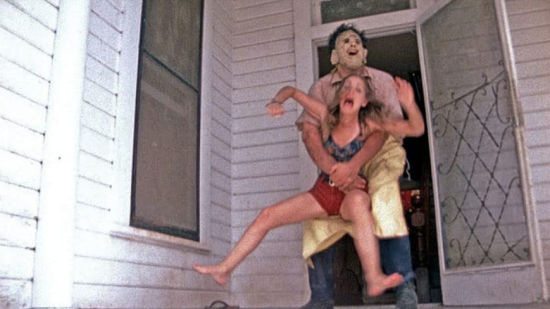 The story’s setup has been ripped off so many times that it now seems rote, but remember, no one had seen anything like it at the time. A group of five white hippie types (three guys and two braless girls) pull their Ford van to the side of the road to allow their wheelchair-bound member Franklin to pee into a coffee can. A big rig rolls by and Franklin goes spilling down the hillside. 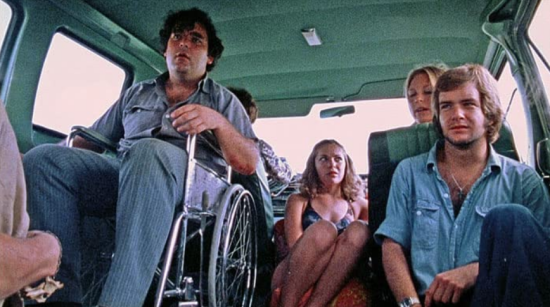 The group is on their way to visit Franklin’s and his sister Sally’s grandfather’s grave to make sure it isn’t a victim of one of the spate of grave robberies. Driving past a slaughterhouse delivers a pungent stench that disgusts the quintet. Picking up a hitchhiker backfires immediately when the facially disfigured young man passes around snapshots of slaughtered cows before cutting himself with a pocketknife. He soon cuts Franklin’s arm before the group evict him from the van. Soon the five are separated while visiting grandpa Hardesty’s disused family home. Little does the group realize that they are next door to the [family of] grave robbers, who also happen to be bloodthirsty killers. 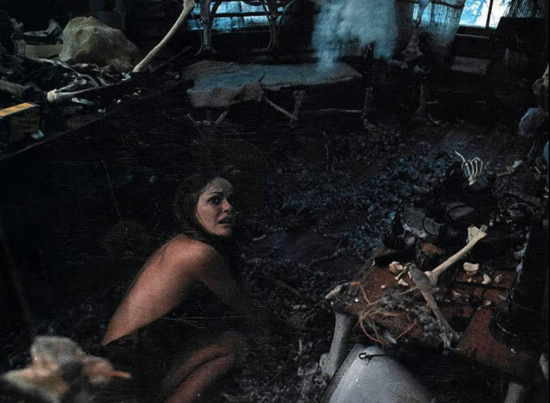 Tobe Hooper uses an arsenal of filmic techniques, lighting designs, while an increasingly noisy soundscape (of screams and chainsaw sounds) ratchets up the fear and suspense to a heart-palpitating rhythm of horrific discord. 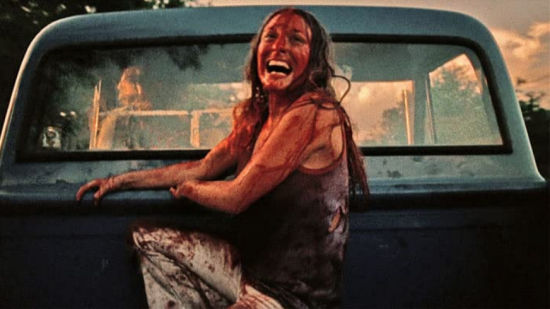 Breathtaking Dutch angles Dutch angles and extreme close-ups of images like bones and eyeballs underscore a gothic dinner table scene that takes the cake for sly social commentary and black humor. No matter how many filmmakers have attempted to recreate the all-out insanity of “The Texas Chainsaw Massacre” very few have come close.