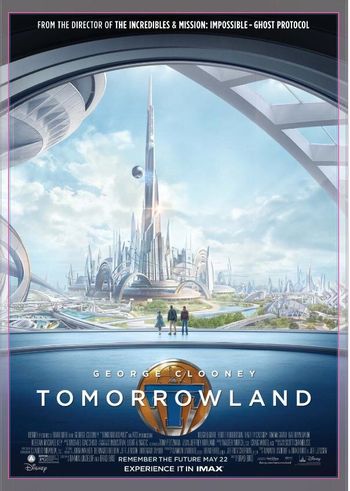 Hollywood hastens its entropic slide with a dystopic children’s story that lacks cohesion, logic, and even style. Audiences believing George Clooney’s barely-seen presence in the movie will elevate it are in for a letdown. The same rule applies to director Brad Bird (“Mission: Impossible – Ghost Protocol”) who seems to have been asleep at the wheel. Even the film’s pro-ecology theme gets muddled beyond recognition due to a litany of plot, character, and dialogue failures. “Tomorrowland” is a poster-child for everything wrong about Hollywood in 2015. How its by-committee script (it was written by four screenwriters) ever got greenlit for production is a mystery. Heads will roll at Disney.

The Disney-brand-aggrandizing plot centers on a futuristic theme park (a la Space Mountain) whose cement-poured surfaces of curved lines create a hermetic atmosphere of cultish aspiration. 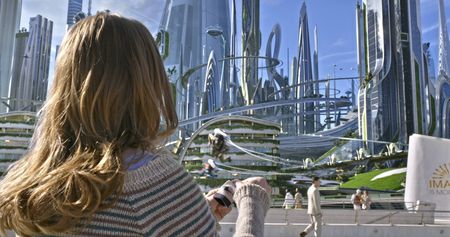 In flashback we see the child version of Clooney’s character Frank Walker attempting to impress the powers-that-be (namely Hugh Laurie) at the 1964 New York World’s Fair with his self-made jetpack. It doesn’t actually work, but it looks nice in a retro steampunk way. The seemingly good thing that comes of Frank’s experience is meeting Athena (Raffey Cassidy) a slightly older flirt who gives Frank a button pin with a “T” (you know, for “Tomorrowland). The button has special powers that transport Frank to (you guessed it) Tomorrowland, a place you could describe as a culture-vacuum.

The movie abruptly switches gears to follow Casey Newton (Britt Robertson), a twentysomething girl who also came into possession of a Tomorrowland button at the hand of Athena. The method to Athena’s madness comes didactically clear in the film’s pasted-together climax involving some call-to-arms pap about young people rising up to repair the toxic sins of their predecessors that are killing the planet.

“Tomorrowland” is an ideal summer movie if you objective is to get an air-conditioned nap at a handy cinema. Sadly, the movie isn’t much good for anything else.