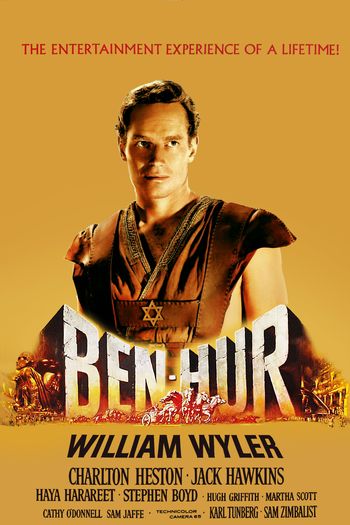 Mervyn LeRoy’s three-hour historical epic “Quo Vadis,” about a Roman general so enamored with a Christian hostage that he comes to question his country’s politics, set the romantically campy tone for the sword-and-sandal genre that went on to include such cinematic phenomena as a 23-picture “Hercules” franchise.

William Wyler’s remake of Charles Brabin’s 1925 silent film (which was based on Lew Wallace’s 1880 novel “Ben-Hur: A Tale of the Christ) set the high watermark for the family-friendly toga-wearing genre due primarily to its mind-boggling chariot race sequence in the days long before computer-generated imagery could remove the dangers from such a spectacle. 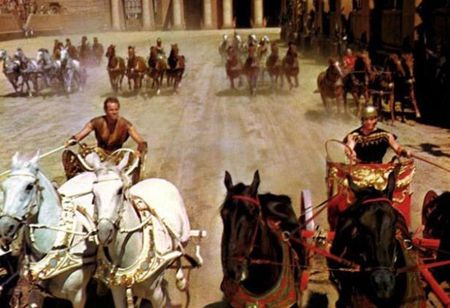 For years, apocryphal stories swarmed about the number of stunt men killed during the filming of the brilliantly edited sequence. No matter how many times you’ve seen it this showpiece of epic spectacle, thrills.

The film’s narrative hook attaches neatly to the personal and political context of the exotic chariot tournament.

Judah Ben-Hur (Heston) is a wealthy Jewish prince living in Roman-occupied Jerusalem with his mother and sister during the age of Jesus Christ. In keeping with the class-traversing demands of the genre, Judah is in love with his slave Esther (Haya Harareet), but of course she is promised to another man. The best kind of love is unrequited, or so at least the film seems to say. 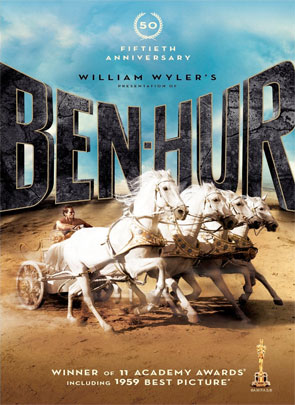 Loose tiles on the roof of Judah’s palatial compound fall on Judea’s newly installed governor, nearly killing the politician. Ben-Hur’s childhood-pal-turned-Roman-commander Messala (Stephen Boyd) seizes the opportunity to strike fear into his soldiers’ hearts by imprisoning Ben-Hur’s family for attempting to assassinate the governor. Messala commits his former friend to slavery as a rower on Roman battleships, creating another classic scene. Ben-Hur makes good on his promise to exact his revenge on Messala after a Roman commander adopts him after Ben-Hur saves his life during a battle at sea. A skilled horseman, the newly freed Ben-Hur impresses an Arab sheik with a team of horses in need of a competent rider if they are to challenge Messala in a life or death chariot duel called the “circus.”

The movie’s feigned biblical connection supports its laborious melodramatic tone. It is laughable from a modern perspective that the Jesus Christ character’s face is never shown. In long-shot scene Jesus’s face is blurred out with what appears to be black ink on the actual film. The crucifixion climax on Golgotha is gratuitous to a fault, and speaks to the cheesy brand of religious propaganda Hollywood sought to disseminate about a period when everyone wore sandals, and soldiers carried swords. 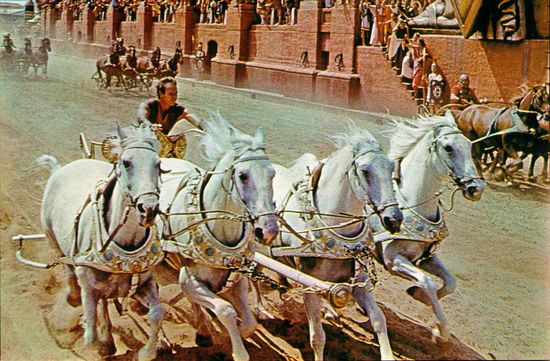