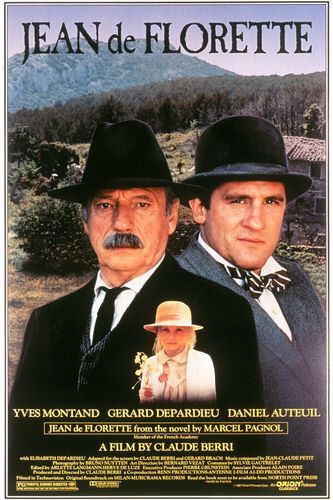 Confusingly released as two discrete films, “Jean de Florette / Manon des Sources” is really two equal parts of a singular movie that should be watched in one sitting. It is unfathomable that the film’s distributors chose to release the picture in two halves, six months apart.

Here is one occasion where modern audiences enjoy an advantage over the film’s original spectators, who had to wait between its first and second-half release (in 1986 and 1987) in order to take in the complete narrative.

The high-budget picture (the most expensive French film ever made at the time) exquisitely captures the natural setting, social customs, and personal prejudices of French villagers whose source of spring water is manipulated at different times by concealed individuals. 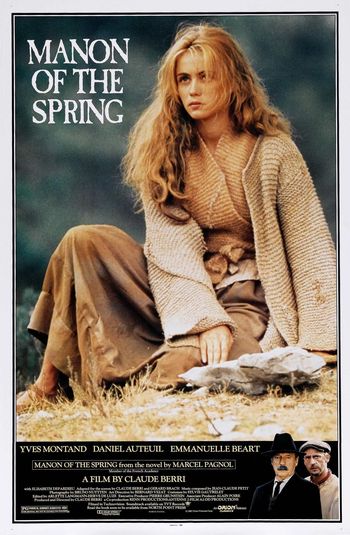 The socially awkward Ugolin Soubeyran (Daniel Auteuil) returns from military service to his family home halfway up a verdant mountainside near his uncle César’s house. The unattractive Ugolin looks to César (Yves Montand), whom he calls “Papet,” for guidance as to how to carry on the family name, particularly since he [Ugolin] is the family’s last member.

Ugolin decides to grow carnations, which he hopes will make him rich. Although initially dubious about the scheme, Papet changes his mind when he considers purchasing adjacent land from his neighbor. After accidentally killing the man, Papet and Ugolin block up a secret spring on the property with a scheme to buy the land cheap.

However, the plot goes awry when ownership of the land shifts to the recently deceased Florette de Berengere, whose hunchback son Jean (Gerard Depardieu) subsequently moves back to his ancestral home with his wife and young daughter Manon. A recently retired tax collector, Jean is a well-read man with a grand strategy to plant a farm and a rabbit-breeding facility that will provide for his family until his death. Ugolin befriends Jean and his wife, with a view toward further sabotaging the family’s ability to make the operation of the property financially viable.

Tragedy strikes. Papet and Ugolin get their wish to take over the land. Unbeknownst to them, however the young Manon witnesses the collusion between them. Years pass, and Manon grows up to be a shepherdess of goats on the mountain. When an opportunity strikes for the beautiful Manon to exact her revenge on the complicit village, it comes with a dual-pronged attack aimed at the hearts of the men who contributed to her beloved father’s untimely demise.

“Jean de Florette / Manon des Sources” is an emotionally potent movie whose lush depiction of Provence captures your imagination in such a tangible way that you feel as though you were living there during the period.