« THE GOSPEL ACCORDING TO ST. MATTHEW | Main | BRINGING UP BABY — CLASSIC FILM PICK » 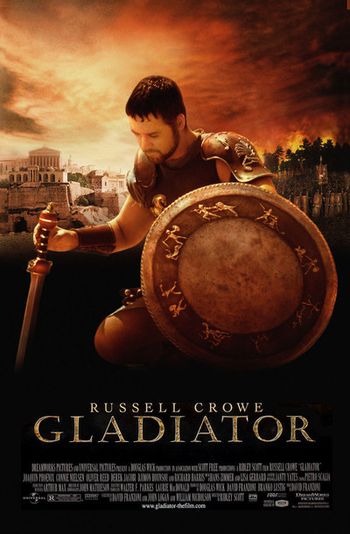 It took “Alien” director Ridley Scott to reinvigorate, however briefly, the sword and sandal genre at the turn of the 21st century. With a script that rings absurdly similar to the betrayal-and-revenge slave plot of “Ben-Hur,” Scott orchestrates the versatile epic formula to detonate violent sword battles that surpass “Ben-Hur’s” much-celebrated chariot race. Scott also puts to shame the brutal jousting battles in “El Cid” (1961). It’s not often that you get to see giant tigers loosely chained inside a Roman coliseum stalking their gladiator prey, alongside gargantuan men with heavy weapons. Scott takes full advantage of green screen composting to create a breathtaking spectacle of historic period drama.

Keeping true to the nature of the genre, the film’s big action spectacle is offset by a straight-ahead melodramatic plot. British master thespians Oliver Reed, Richard Harris, and Derek Jacobi bring significant gravitas to the barebones story opposite a stylistic character clash that occurs between, and by, Russell Crowe and Joaquin Phoenix. Crowe and Phoenix at times give their scenes an unintentionally camp quality that occur as happy accidents.

The year is 180 A.D. General Maximus (Russell Crowe) leads emperor Marcus Aurelius’ army to victory against a legion of barbarian adversaries in Germania. Times are tough. Many hundreds of arrows fly and heads are decapitated. Russell Crowe takes dramatic liberties similar to those adopted by Charleston Heston in “Ben-Hur.” It’s all just a walk in the park for Crowe, who puts his signature slow-burn vocabulary of practiced reactions through all five expressions in tight rotation.

It’s a rule in the sword-and-sandal textbook that heroes must wink at their character’s self-righteous yet humble sense of stoic hubris. In this case, Crowe winks at himself. This isn’t to say that Crow’s character isn’t a kick to watch. He adequately fills the film’s clearly drawn demands. He also happens to admire his own reflection. Where was Tom Hardy when Ridley Scott needed him? 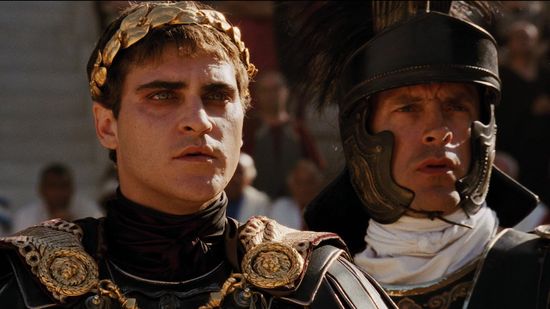 Maximus is his father Caesar’s (Richard Harris) favorite son. His other son Commodus (Joaquin Phoenix) possesses none of the virtues that Caesar desires, namely: “wisdom, justice, fortitude, and temperance.” The ever-petulant Commodus is all petty jealousy and outrageous ambition. Even the virtues that he imagines he possesses (“ambition, resourcefulness, courage, and devotion”) each come with an asterisk beside them.

Maximus refuses his father’s offer to succeed him as emperor, even knowing that his evil brother will make life miserable for everyone when he takes the throne. It doesn’t even take that long. Commodus expedites the process by stabbing daddy to death. Next on the list are Maximus’s wife and child, not to mention the man whom he calls brother. However, Maximus is a wily one to kill. He ends up as a slave whose only purpose is to give his life away on a battlefield of sand before crowds of bloodthirsty Romans. A fortuitous meeting with Proximo (Oliver Reed), a surviving gladiator, provides Maximus with the fight coaching he needs to stay alive in the coliseum, where anything from blade-wheeled chariots to tigers can emerge, and attack any gladiator with a hellish fury that would call for diapers if it were real. 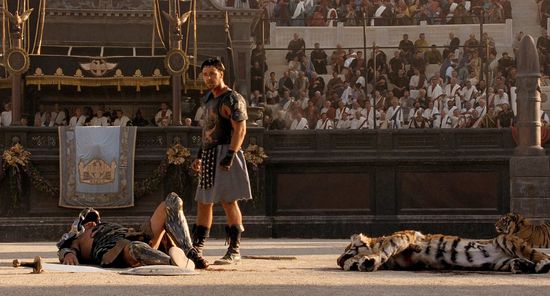