Following on the heels of his equally dynamic feature debut film “Barravento,” “Black God” redoubled Rocha’s Cinema Novo movement, which carried Rocha’s socially rebellious anti-capitalist and anti-religious beliefs. As a founding member of Brazil’s radical left, Rocha espoused the eradication of money while working as a film critic and journalist in his teens. After making this film, Rocha published his “Aesthetic of Hunger,” a socio-political manifesto calling for a revolutionary cinema, that he fulfilled with his next two films (“Terra em Transe” and “Antonio das Mortes”), which combine to form a trilogy. 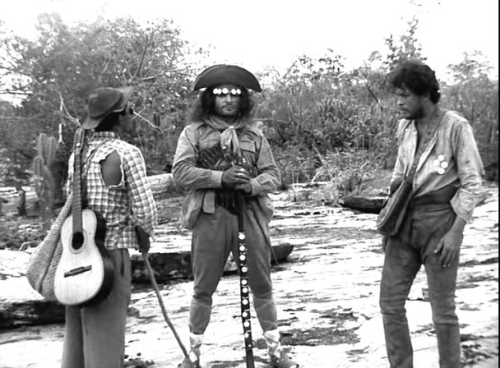 The Brazilian maverick from Bahia appreciated the works of Luis Bunuel, Jean Luc Goddard, and Roberto Rossellini, whose influence comes through in Rocha’s helter-skelter films. In turn, “Black God, White Devil” inspired a diverse generation of filmmakers from around the globe. Traces of his influence can be found in auteurs as distinctive as Sergio Leone and Alejandro Jodorowsky.

Fiercely political from beginning to end, the linear narrative follows Manuel (Geraldo Del Rey), a peasant ranch hand, and his downcast wife Rosa (Yona Magalhaes). A drought ravages the arid Sertao outback where Manuel and Rosa struggle to survive during the 1940s. When his cattle rancher boss attempts to cheat him, Manuel kills the brute and goes on the run with Rosa into the hinterlands.

The newly minted outlaw falls under the spell of Sebastiao (Lidio Silva), a bloodthirsty religious leader (a self-decreed saint) who condones violence and human sacrifice. Sebastiao preaches about an imaginary “sacred” island destination where the land and the sky will become one after a rain of gold. An apocalypse is coming, he promises. Sebastiao adds to his followers with an ongoing procession of intimidation and violence. His goons fire rifles into the air when they pass through sleepy villages. The leader personally attacks the women that he effectively kidnaps. He makes Manuel crawl for miles on his knees while balancing a heavy rock on his head before convincing his loyal subject that Rosa’s newborn infant is the devil, and must be sacrificed. Only blood can cleanse the souls of Sebastiao’s flock. When Sebastiao kills her baby, Rosa takes up the dagger against the charlatan. Now she and Manuel are equals. Rocha’s roving handheld camera creates a subjective viewpoint of the remote landscape and the oppressed peasants who are easily exploited by anyone with a gun. Enter Captain Corisco (Othon Bastos), a cangaceiro (a nomadic bandit) to co-opt Manuel’s and Rosa’s quest for freedom, if not salvation. Dressed in a Napoleonic-styled hat bejeweled with coins, Corisco fits the bill of a bandolero-toting cowboy. A church-hired assassin, on a mission to kill Corisco, lurks in the sagebrush of the desolate region.

“Black God, White Devil” is a cinematic call for the audience to reject all political and religious doctrine in favor of an individual liberty at one with nature, something you could call sustainable. Posted by Cole Smithey at 10:00:29 PM in Brazilian Cinema